Playboy began its 60th anniversary celebrations with an 18-page photo spread featuring the iconic Kate Moss in all her glory. 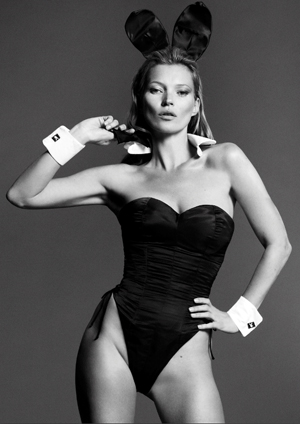 To begin its 60th anniversary celebrations, Playboy released the anticipated double issue for January/February 2014 featuring Kate Moss on the cover and including an 18-page photo spread of the timeless model.

Along with her gorgeously naughty photos, Moss was also interviewed by Tom Jones with a playful Q&A, which besides its raw candidness, revealed quite a bit about the 40-year-old beauty. She claims to be a private person, something everyone already knew, but she also gave away lots of personal details such as her favorite drink.

“My drink is the French 76, which is vodka, lemon juice and sugar topped with champagne,” Moss told Jones after he asked her what a drink named Kate Moss would contain. “Two of those and you’re like, ‘Oh life is amazing!’ It’s heaven.”

Moss also revealed that she flew to Portofino in a private plane with her husband for their wedding anniversary. But, she was completely ticked off that the paps were all waiting for them once they arrived there. “I didn’t think anyone knew where we were going,” she said. “F****** paps. Bastards!”

As to how she keeps herself looking so young, Moss would only say that, “I think as an individual, it doesn’t matter how old you are.” And young she looks! In her Playboy photos, the fashion icon does not look a day over 30, and even has an edgier look than she did when she was in her 20s.

While she did not age much physically, Moss has definitely matured mentally, and is currently in a far better place in life than she was when she first started out in the modeling business. She’s happily married, designs clothes, still models and has stepped away from the dangers that grabbed her in her youth, including the almost inevitable drug trap.

But, she’s still never bored, either.

“I don’t do boredom,” she said. “Excitement is wherever I am!”