After days worth of delays, the South Pole Allied Challenge race is finally underway — and Prince Harry is already in the lead! 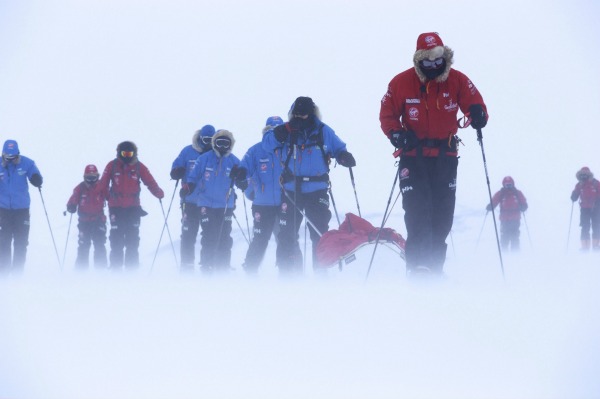 Our favorite ginger is feeling frosty today as the South Pole Allied Challenge is finally underway after a long delay.

The 208 mile trek to benefit Walking with the Wounded finally got started around 1:30 p.m. yesterday, according to a release from the organization — and Prince Harry’s team is already in the lead!

“Team Glenfiddich were leading for the first few minutes, with the Commonwealth (Soldier On) Team close on their heels and the U.S. (Noom Coach) Team behind, weaving their way through the sastrugi,” said expedition manager Victoria Nicholson. “The sastrugi is really challenging — we don’t know if it is going to be like this all the way to the Pole but the teams are all happy and raring to go.”

“All teams built their camps last night in good spirits despite feeling exhausted from the short but tough ski,” the statement from the organization reads. “It will take all the teams a day or two to get into their strides, as they all required rest and rehydration last night to set them up for a strong day today, it is estimated that each team will complete approximately nine hours of skiing today.”

Harry’s group, Team Glenfiddich, covered about eight and a half miles the first day of their hike in subzero temperatures.

Watch the start of Prince Harry’s race to the South Pole:

“The scenery here is quite remarkable, and for 360 degrees nothing can be seen, it really is quite spectacular,” Harry said in an interview last week.

“Every single person who takes part in this challenge is extraordinary,” he said of his fellow trekkers, many of whom have been injured in battle. “The fact these guys have made it to this point is extraordinary and I count myself incredibly lucky to be part of it.”

Two other familiar faces join Prince Harry in his quest: True Blood star Alexander Skarsgård is on the U.S. team and The Wire star Dominic West joins the Australian and Canadian team.

10 Things to know about Prince Harry’s girl Cressida Bonas
Did Prince Harry ride the white pony in Vegas?
Prince Harry: “I let myself down”