Pictures from this week’s episode of The Mindy Project make it seem like “Christmas Party Sex Trap” might be the episode Danny and Mindy shippers are waiting for! 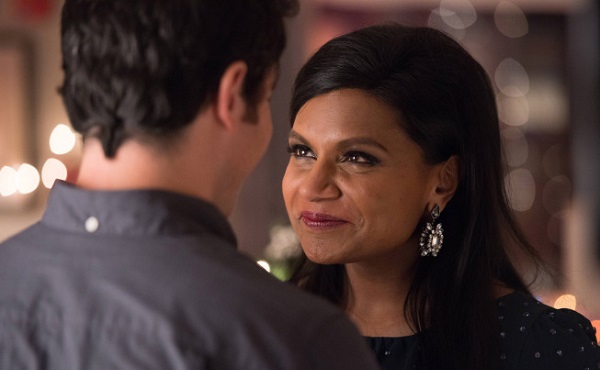 The Mindy Project‘s Mindy is a young, hot, single woman who certainly doesn’t need to settle down with a steady boyfriend or husband, but we know that’s what she wants. She already tried it once, but it just didn’t pan out. With an impending hiatus, will our girl ever find her man? The above picture gives us hope!

The Mindy Project drama: Should the other Dr. L call rape? >>

This season has been an endless string of almost-boyfriends like the skater guy (Timothy Olyphant) and Jason, the stuck-up writer. There’s also her crush on the lawyer, Cliff, and that weird bonding experience she had last week with Peter (Adam Pally, Happy Endings) after her ex’s wedding. At the end of the day, though, there’s only one guy that’s right for Mindy and we all know it’s Danny (Chris Messina).

Just a couple short weeks ago, when Mindy crashed at Danny’s house, they almost had a moment then. While Mindy was talking about Cliff, Danny thought she was talking about himself. When he thought for sure Mindy was suggesting she liked him, he encouraged her to go for it. That, of course, cued her to deciding to pursue Cliff.

Still. We continue to see near-misses with Mindy and other guys, as well as with Mindy and Danny. This week’s preview doesn’t bode well. It looks like Danny will take all the fun out of the office Secret Santa game by gifting Mindy with office/medical supplies. Is he for real? Or is he just psyching her out in preparation for something really sweet? Being accidentally adorable and romantically bi-polar kind of seems to be Danny’s M.O., after all. And check out that look when he hands her the stapler! He looks like he’s actually up to something sweet, right? (P.S. What is that ginger bread house?)

Add that scene to that picture of Mindy looking to Danny with surprise and adoration in her eyes and we think we’re being set up for a super cute relationship after the show’s winter hiatus. At least we hope so. Otherwise, we’re in danger of not seeing Mindy and Danny for a Season 3 of The Mindy Project.