It was a great way to honor a loyal, hometown kid. The late James Gandolfini had a street named for him in Park Ridge, New Jersey. 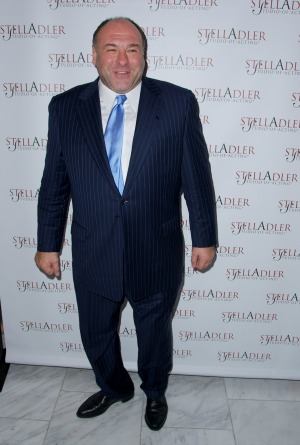 James Gandolfini is gone, but certainly not forgotten. On Sunday, the town of Park Ridge, New Jersey honored the star with his own street.

A stretch of Park Avenue in the east coast city was named after the late actor. Family members and friends were in attendance at the unveiling which occurred in front of the Ridge Diner, a local hangout for The Sopranos star in high school.

The highlight of the event was Gandolfini’s 14-year-old son Michael speaking to the crowd. He shared some of his memories of his dad and his beloved hometown.

The teen lovingly revealed that he would “never forget going to the Park Ridge diner and eating there. He just told me every story about every place here.”

He also reminisced that his dad loved Park Ridge because he “definitely made a point of coming here.”

Gandolfini died of a heart attack in June while on vacation with his son in Italy. He also left behind his second wife, Deborah Lin, and his young daughter, Liliana, who was less than a year old when he passed away.

One of his final projects, Enough Said with Julia Louis-Dreyfus, came out in September. He’s considered a dark horse for a posthumous Oscar nomination for Best Supporting Actor and he’s already nominated for an Indie Spirit Award for that same role.