This might be one Hollywood marriage that works out. Michael Douglas is trying to reconcile with his wife over pancakes and maple syrup. 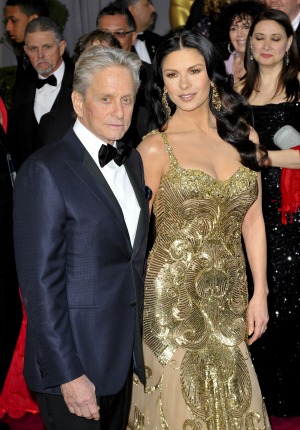 It ain’t over until the man makes his lady pancakes. Don’t count out Michael Douglas and Catherine Zeta-Jones’ marriage just yet. It seems that the couple is bonding over breakfast each day.

According to the U.K. publication The Mirror, the 69-year-old makes his way over to his former New York City residence every morning. A family friend told the paper that he’s hoping gestures like this will reignite the sparks that first brought them together.

Michael Douglas: I lied about having throat cancer >>

While Douglas is keeping his heart open, his 44-year-old estranged wife is keeping her distance.

The source shared, “Michael would give his right arm for a reconciliation but Catherine’s warned she is not ready to commit and she’s still not ruled out divorce.”

It’s been a tough couple of years for the two superstars. The Wall Street actor suffered from tongue cancer while Zeta-Jones has struggled with bipolar disorder. After making sure her husband was in remission, she began to focus on her own mental health. The couple split in August.

The source also claims that she’s still upset about his oral sex comment causing his bout with cancer because it breached their privacy.

The insider said, “Catherine is making him suffer. She nursed him through those dark days when cancer almost took his life and she feels the comment about oral sex was like a kick in the teeth.”

Reportedly, their kids, son Dylan, 13, and daughter Carys, 10, are enjoying having their father in the picture. He even stops by at the end of the day to watch TV before they head to bed.

“It’s very sweet when he turns up at the apartment to cook for them because he so desperately wants to be back as part of the family’s life. Catherine thinks it’s really touching he’s being so hands-on with the kids — and he’s praying it’s the key back into her heart,” added the family friend.

Will Douglas’ hands-on approach work in getting his wife back? The two are still wearing their wedding bands, so hopefully that’s a positive sign that a reconciliation is in their future.