What caused the deadly car crash that killed Paul Walker and Roger Rodas? Theories abound, but everyone seems to agree on one factor: Speed. 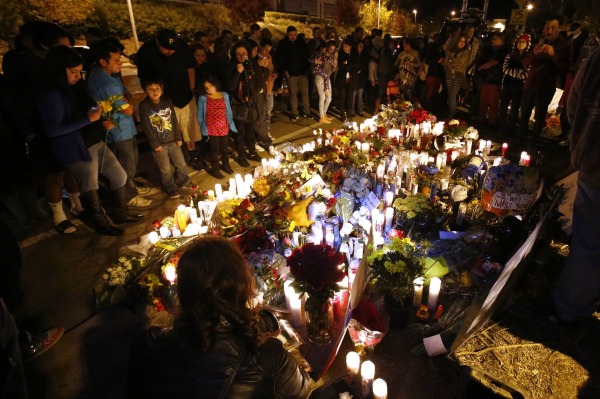 Investigators have confirmed that speed was a factor in the single-car collision that killed actor Paul Walker and pro driver Roger Rodas, but have not yet determined how fast the vehicle was traveling when it hit a pole and several trees before bursting into flames.

Now, after a phone tip suggesting another high-powered car was spotted at the scene at the time of the accident, police say they will investigate if the pair was street racing.

Los Angeles County Sheriff’s Sgt. Richard Cohen told CNN that, “Naturally, from an investigative standpoint, we need to find out if [racing] is one of the issues.”

Friends and co-stars in shock after death of Paul Walker >>

But a witness told Hollywood Life that while speed may have been a factor, it’s unlikely the pair was racing.

“They were only driving for like five to six minutes when the car crashed, they didn’t have enough time to be racing,” Jim Torp said. “Plus there were two highway patrol officers on site because there were so many high performance cars at the event.”

Walker was participating in a fundraising day to benefit victims of the Philippines typhoon.

While Rodas was a professional race car driver, Torp said it is much more likely that a mechanical failure caused him to lose control of the car — a theory supported by sources who told TMZ they saw evidence of a fluid burst and leak before the initial point of impact.

“Roger lost control… They didn’t spin or anything,” Torp claims. “They went into a tree. They hit four trees and took a big light pole down. The light pole came down and the car bounced off of it. And then they crashed into a tree, that’s what eventually stopped the car,” Jim said.

An auto industry insider tells SheKnows that the design of the Porsche Carrera GT could be what caused such a huge fire to spread so quickly.

“Like in a handful of high-performance sports cars, the fuel tank is in the front and the engine is in the back,” the source said. “The fuel lines go down the middle. The way it looks like the car hit the pole and trees, that tank could easily have been punctured and started the fire right at their feet.”

The source also noted that the speed limit on the street where the crash occurred is 45 MPH, and the damage to the car suggests “speeds higher than that.”

Walker’s sister angrily disagreed that racing had anything to do with the accident.

“They were absolutely not racing, that’s a complete lie. It hurts us when we hear these lies and it makes our grief worse and more painful,” Ashlie Walker told the Daily Mail.

“These are irresponsible allegations and people are trying to make out speed and racing was the reason for his death when it was just a terrible accident.”

According to the coroner’s office, the bodies of the two men were so badly burned that a visual identification was not possible, and formal ID for legal purposes will have to be accomplished through dental records.