In The Walking Dead Season 4 mid-season finale “Too Far Gone,” the Governor completely reverted to his old self and destroyed what little peace Rick and his group had managed to eke out in the prison. What will happen now that everyone is scattered to the wind? 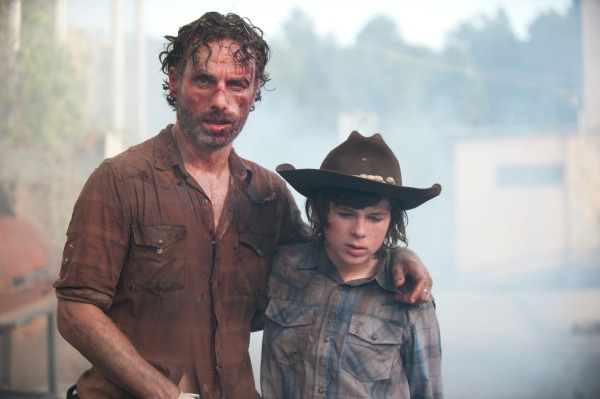 After more than three seasons of death and carnage, it would seem that watching a main character die on The Walking Dead couldn’t possibly be as shocking or heartbreaking anymore. But with one swipe of a sword, the Governor took out a beloved character and set into motion a series of events that has once again changed everyone who has thus far managed to survive the zombie apocalypse.

Does The Walking Dead‘s Norman Reedus have a role in The Crow? >>

Warning: Major spoilers ahead for The Walking Dead Season 4 mid-season finale. You have been warned.

Not too long ago, we at SheKnows posed the question as to whether or not people wanted to see more of the “good Governor” who was introduced in the previous episode. At the time, the show had given us a guy who seemed to have learned his lesson from the horrible events at Woodbury. He had even found himself a new family with a new daughter to raise. But in last week’s episode, the Governor began to revert back to his old ways and in last night’s mid-season finale, he became the kind of man he’s always been: evil.

The Governor arrived at the prison to take it from Rick and though he claimed he wanted to do it in a peaceful manner, he wasn’t willing to give up control. Instead of accepting Rick’s terms and letting both of their groups live together in relative safety, the Governor brutally murdered Hershel with a samurai sword and began a battle that took many lives from both sides.

Once that happened, it was satisfying to see Rick get the chance to beat the tar out of the Governor. That fight was a long time coming, that’s for sure. But in the end, it wasn’t Rick who took the Governor’s life. In a fantastically-written series of scenes, three different people had a hand in killing the man who had wreaked havoc on so many. First Rick got in his licks, then Michonne got the chance to stab him with her blade (and the same one that took Hershel’s life), then finally it was Lilly’s turn to put a bullet through his head.

One the carnage began, it seemed to go on forever. After Hershel’s death came the destruction of the prison, thanks to the tank. Then those who were supposed to be boarding the bus to safety kept running off instead. Maggie went after Beth, the littlest kids went to “help” and ended up leaving little Judith behind. Daryl was nearly killed by walkers but managed to take them down and simultaneously take out the tank. Many of the Governor’s people were killed, Rick’s bus took off without many of the prison group and everyone was left running in different directions as the place was overrun by walkers.

What we know now is that Rick is badly injured, his baby daughter may be dead and he’s on the run with Carl. Beth ran off with Daryl, Maggie found Sasha and Bob (who luckily has a treatable wound), Glenn is sick on the bus with others (including, hopefully, the gun-wielding kids), but Michonne is on her own.

That’s a lot of carnage for one episode, even for a show like The Walking Dead. With everyone split up, the safety that came from numbers is now gone and it’s entirely possible that more people could die when the show returns on Sunday, Feb. 9.

What did you think of The Walking Dead mid-season finale?