Could The Tomorrow People somehow be related to ancient mythology? We’re about to find out thanks to Stephen’s father and the strange Limbo from last episode. 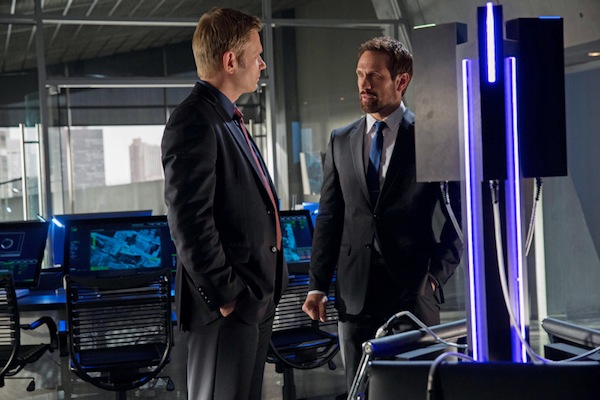 The last episode of The Tomorrow People really mixed things up again. Stephen (Robbie Amell) saw his father during his near-death experience. But what does that mean? Is the leader of The Tomorrow People dead? Or trapped in some sort of Limbo realm? The answers are coming to you next week, but we’ve got the scoop early.

Here’s the synopsis for the episode from The CW: “Stephen is determined to uncover what he hopes is the key to finding his father, and crafts a plan with The Tomorrow People that involves getting inside Jedikiah’s head. Meanwhile, Cara and Russell encounter an uninvited visitor in the subway tunnel base. Stephen takes a risky opportunity and snoops around Ultra.”

Here’s what we think that means: Stephen is weirded out by this supernatural Limbo he discovered his father in last episode. He thinks Jedikiah might have answers but knows the leader won’t divulge anything he doesn’t have to. They find an opportunity and kidnap him, but the attempt doesn’t go as planned. Perhaps Jedikiah doesn’t know as much as they thought or he has a better mind block than expected. After a failed attempt with Jedikiah, Stephen risks everything to snoop around Ultra and find the information on his own.

All in all, the synopsis doesn’t tell us a lot at all, but we’ve managed to scope out a few other details.

Jedikiah will find himself at the mercy of The Tomorrow People after he’s accidentally kidnapped by Russell and Cara. He’ll prove to be more trouble than he’s worth, though, according to Zap2It, but we’ll discover more about his love for his super-secret girlfriend with abilities.

Top 10 reasons The Tomorrow People is heating up >>

The title of the episode will lead us to answers about Stephen’s father and the weird “Limbo” world Stephen found himself in last episode. Stephen’s father uttered the word “Thanatos,” which apparently refers to the realm he’s stuck in. Hopefully it isn’t the paradise he dreamed of. We think that’s unlikely, but next episode will spill the secrets on this world. The two clues we have from Zap2It are: It’s Greek and the name is a nickname.

According to Greek mythology, Thanatos was the Greek personification of death. We don’t think Stephen’s dad is dead, though. Maybe this mystical underworld has more to do with the Hades version than the Christian. Let’s safely assume Stephen’s father isn’t actually dead but getting him back is shaping up to be quite the adventure.

The next episode of The Tomorrow People airs Wednesday, Dec. 4, at 9/8c on The CW.

What do you think Thanatos really is?