Ethan Hawke would like us to know he thinks we have childish views of monogamy and fidelity. Could he be justifying an extramarital affair? 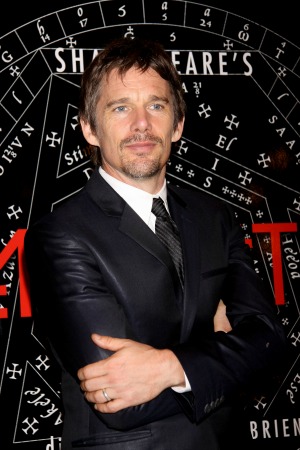 Ethan Hawke is already on his second marriage and has had many relationships in his past, so perhaps that is why he is willing to tackle a rather controversial topic: monogamy.

Many people will disagree with the Getaway actor‘s thoughts, but he firmly believes a relationship should not only be concerned with sexual fidelity, because humans as a species are not meant to be monogamous.

The actor was previously married to Uma Thurman, whom he shares two children with, before marrying his current wife Ryan Shawhughes, who he also shares two daughters with.

Hawkes may be very happy in his current marriage so he was willing to share his somewhat odd views during an interview with online retailer Mr. Porter for its latest edition of The Journal.

Hawkes said, “My relationship with my present wife is thrilling to me and I’m committed to it. But neither she nor I know what shape the future will come in. Sexual fidelity can’t be the whole thing you hang your relationship on.”

“If you really love somebody you want them to grow, but you don’t get to define how that happens. They do.”

The Purge actor continued to suggest that extramarital affairs are really not that bad if you think about it, because they’re justified in the sense that our species is apparently not meant to be monogamous.

Hawkes said, “People have such a childish view of monogamy and fidelity. ‘He’s cheated so he’s bad, she’s cheated so she’s bad,’ as opposed to a recognition that our species is not monogamous.”

“To act all indignant, that your world has been rocked because your lover wasn’t faithful to you, is a little bit like acting rocked that your hair went gray. Human beings are sexual beings.”

As mentioned, Hawkes was previously married to Kill Bill star Uma Thurman before their marriage sadly ended with an explosion of infidelity allegations. Although Hawkes has never admitted to being unfaithful, his recent comments have caused speculation that he could possibly be justifying having an affair.

Even more so because the woman that the Gattaca actor is married to now happens to be his and Thurman’s former nanny, and one of the suspected reasons their marriage fell apart.

The Oscar-nominated actor did have a few words to say about his previous marriage to Thurman, though, commenting that he does not regret marrying at a young age.

Hawkes said, “We tried to be as optimistic as we could be: We all want to believe in love and the possibility of love. The older you get, the more you realize how powerful love is.”

“You understand the right ways for emotion to lead your life and the dangerous ways. I don’t regret marrying early.”