Lindsay Lohan could be getting her lawyers to file yet another lawsuit. This time, the target is Rockstar Games for allegedly making her into a raunchy video-game character. 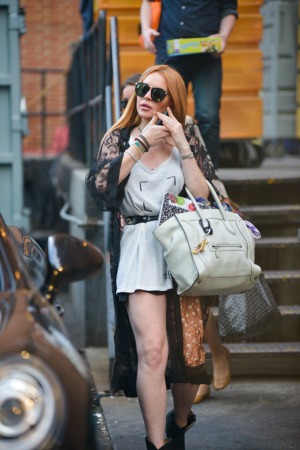 Lindsay Lohan is known for her wild behavior and distinctive look, and the starlet clearly believes that she’s so influential that the makers of “Grand Theft Auto V” designed a character around her.

It has been reported that the Mean Girls star is very upset and has asked her lawyers to draw up a lawsuit against the video game’s producers, Rockstar Games.

Why? Well, Lohan allegedly believes that — without her permission — the developer has created a character that not only looks like her but also acts like her.

According to TMZ, Lohan could receive a hefty sum in compensation from the manufacturer if she wins her case.

“Grand Theft Auto” is known for its realistic graphics, and Lohan believes that she was used as inspiration for a blond woman whose missions seem to have been based on her real-life scenarios.

In one sequence, the character can be seen using her cellphone, and the player’s mission is to help the character escape from the paparazzi.

Another scene shows the alleged Lindsay-inspired character at a building that is believed to resemble the Chateau Marmont hotel in West Hollywood, a place where Lohan has lived and frequently let loose. The mission is to photograph the possible Lohan character having sex on camera.

There is some debate about who exactly inspired the character. It could be Lohan, or it could be one of three models: Shelby Welinder, Kate Upton or Candice Swanepoel.

If the rumor is to be believed, then this will not be the first time that Lohan has decided to sue someone. She previously directed her anger at Pitbull, and she lost! The Canyons actress sued the Latin American hit-maker for a line in his song “Give Me Everything” in which he joked that he had been “locked up like Lindsay Lohan.”

Has all the partying depleted Lindsay Lohan’s budget so badly that she needs to sue people for a little more income?