He’s about to be a dad again! Michael Jordan and his new wife are expecting their first child together, and she’s due soon. 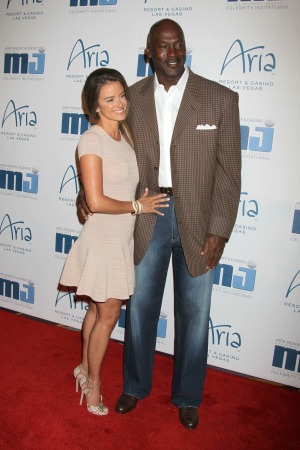 It’s baby time for Michael Jordan and his wife, Yvette Prieto. The couple, who married in a wildly expensive wedding in April, are expecting their first child together.

The news was confirmed to People by the athlete’s rep. While no information about the due date or the gender of the baby was given, a photo posted on the sports gossip site TerezOwens.com indicates she is in her third trimester. Until now, the couple have done a great job of keeping her pregnancy out of the press.

The 34-year-old mother-to-be dated the former NBA legend for five years before the two tied the knot earlier this year. They met at a Miami nightclub while she was pursuing her modeling career in southeastern Florida.

The wedding cost $10 million and was attended by famous sports figures like Patrick Ewing, Tiger Woods and Scottie Pippen. The newlyweds were serenaded at the elegant reception by Usher and Robin Thicke. Attendance at the reception came in at 1,500 guests.

Evelyn Lozada is grateful for her pregnancy >>

A source told People at the time, “They’ve been planning for months and months. He wanted to give Yvette everything she’s ever wanted.”

This won’t be Jordan’s first time at fatherhood, though. He is already a dad to three grown children from his first marriage to Juanita Vanoy. The 50-year-old sports star was married to Vanoy for 17 years before they divorced in 2006. Jeffrey, 25, Marcus, 22, and Jasmine, 19, are going to have a lot of fun with their new half sibling.