Hollywood is reacting with shock and disbelief after the sudden death of actor Paul Walker in a California car crash. 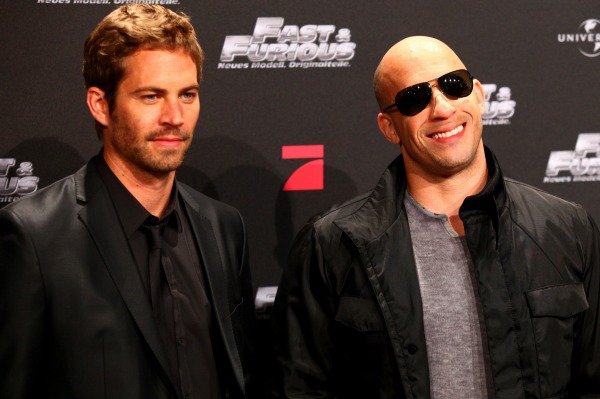 Fellow actors, friends and co-stars of Paul Walker are in complete shock over the Fast & Furious actor’s death yesterday in a brutally violent car accident.

Walker was a passenger in a Porsche Carrera GT driven by a friend, pro driver and financial planner Roger Rodas, when the car lost control. According to witnesses, it slammed into a pole and a tree and burst into flames in front of horrified onlookers, including Rodas’ 8-year-old son.

Paul Walker: A hottie with a heart >>

Walker’s reps confirmed his death in a statement on his official Facebook page.

“It is with a truly heavy heart that we must confirm that Paul Walker passed away today in a tragic car accident while attending a charity event for his organization Reach Out Worldwide,” they wrote. “He was a passenger in a friend’s car, in which both lost their lives. We appreciate your patience as we too are stunned and saddened beyond belief by this news. Thank you for keeping his family and friends in your prayers during this very difficult time. We will do our best to keep you apprised on where to send condolences.”

“Your humble spirit was felt from the start, wherever you blessed your presence you always left a mark, we were like brothers & our birthdays are only 1 day apart, now You will forever hold a place in all of our hearts @paulwalker legacy will live on forever. R.I.P.,” Ludacris wrote.

“My heart is hurting so bad no one can make me believe this is real Father God I pray that you send clarity over this cause I just don’t understand My heart hurts it’s broken no one can convince me that this is real,” wrote Tyrese. “Prayer warriors please pray real hard for his only child, his daughter and family…#HeartOfAnAngel13YrsFamilyForeverWeJustCelebreatedYour40thBirthday….. My God… My God… I can’t believe I’m writing this.”

“At least I got to say I love you,” Tyrese continued. “#OurLastExchange but our laughs and moments will live forever#ThisIsWorstThanMyWorstNightmare#GodiLoveYouAndiwillneverquestionYou…. But this I just don’t understand #PaulForeverFamily#MyHeartHurtsSoBad please pray for his daughter and family…”

Dwayne Johnson sat down with Entertainment Weekly to talk about his co-star and friend.

“He was motivated by work that allowed him to take care of his family, number one, and that also allowed him the power and the leverage to help people in need and in crisis,” The Rock told the mag.

Tell us: What are your favorite memories of Paul Walker?