Evelyn Lozada will be changing diapers and enjoying midnight feedings in 2014. Her longtime dream of having another child is coming true! 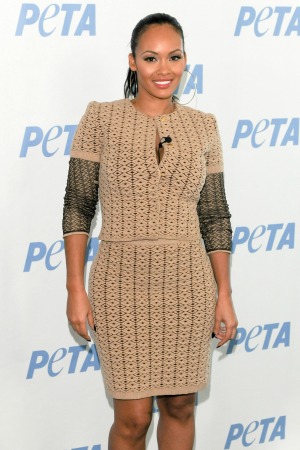 It’s that time of year when everyone is filled with gratitude. For Basketball Wives star Evelyn Lozada, it’s gratitude for the baby she is going to give birth to in three months.

The reality star told People on Friday, “I am so excited to announce a wonderful blessing — I’m pregnant!”

The VH1 personality had a tumultuous 2012, so the good news brings great joy to her personal life. Last year, Lozada divorced former NFL player Chad “Ochocinco” Johnson after only two months of marriage.

The end of their marriage involved a domestic-abuse incident where the 37-year-old was allegedly head-butted by her then-husband. She filed for a restraining order, and Johnson eventually pled no contest to the charges against him. He avoided jail time, but he lost his job with the Miami Dolphins football team, and he had to pay restitution for his ex-wife’s medical bills.

The athlete eventually found himself in the slammer for violating his probation in the domestic-abuse case by sexually harassing his lawyer. He slapped his lawyer’s butt in court, which resulted in 30 days in jail from a less-than-amused judge.

VIDEO: Vom! Kelly Clarkson’s pregnancy is not so rosy >>

Lozada has moved on from the abusive relationship, but she is not naming the baby’s father right now. She already has a daughter — 20-year-old Shaniece — from a prior relationship.

She shared, “I’m excited about being a mommy all over again. This is something I’ve been wanting for years and I can’t believe it’s finally happening.”

Lozada has talked on her reality show about wanting a baby. So the news that she is pregnant is a longtime dream come true!