It’s true that December isn’t really Will Ferrell appreciation month, but with this month’s release of Anchorman 2: The Legend Continues, we are deeming it so. To celebrate this momentous occasion, we bring you just a sampling of a few of our favorite Will Ferrell movie moments. (Note: All clips NSFW.) 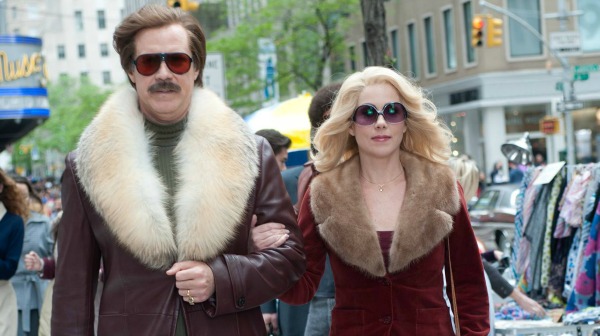 If there is one thing we appreciate the hell out of Will Ferrell for, it’s his willingness — nay his enthusiasm for — taking off his shirt. He never misses an opportunity to make a parody of himself with his somewhat “doughy” physique, and it’s especially funny when he’s portraying a professional athlete like in Blades of Glory. Enjoy this clip of our shirtless wonder, trying to “coach” Jon Heder in the ways of dating — a shining example of how Ferrell makes “yuck” funny.

Why The Other Guys is a relative sleeper when it comes to Will Ferrell movies remains one of the world’s most vexing mysteries. We would argue The Other Guys is in the top five of Ferrell’s efforts, and yet it remains a bit under the radar. In this hilarious cop “drama,” Ferrell takes one for the team, by playing the office nerd who is funnier and smarter than his colleagues, but that no one likes. He has a confusingly hot wife (much to the irritation of his macho partner, Mark Wahlberg) and owns Wahlberg in the epic “Tuna vs. Lion” debate. If you haven’t sat through this one, we suggest you right that wrong immediately.

Ron Burgundy wants to buy you a Dodge Durango >>

Ferrell hasn’t become a comedic legend for playing a male cheerleader and the cowbell dude on Saturday Night Live (although it helped). He’s become a Hollywood staple because he is clever about sharing the limelight with other talent. In The Campaign, we get one of the best comedic pairings of all time — Ferrell and Zach Galifianakis. Both are running for the same seat in congress, but each has a decidedly different campaign style. Ferrell plays Cam Brady, a seasoned politician who will lie, steal and cheat to win the public’s favor. Galifianakis’ wholesome, do-gooder Marty Huggins is no match against this formidable opponent — or is he?

Solid comedy is all about exaggeration, and Ferrell is a master at this. He took the concept of blended families and attached it to the story line of two stepbrothers who are almost 40 years old and still living at home. In some of his story lines, Ferrell marches up to the line and in others he takes his co-star’s hand (John C. Reilly) and jumps way over the line with both feet. In Step Brothers, Ferrell chooses the second approach, making the humor in this movie laugh-til-your-guts-ache funny, but also wildly inappropriate.

Anchorman: The Legend of Ron Burgundy

Is there any way Ferrell could have known when he brought us Ron Burgundy (who is kind of a big deal) that he would become a cult classic? There are so many quotable one-liners in this movie, it makes our heads explode with excitement every time we watch it — and it’s one of those movies you have to watch more than once (or twice or 20 times) because you’re laughing so much you miss a lot of it the first 10 times. Great Odin’s Raven, we can’t wait for Anchorman 2! Until then, we’re going to mark the days off the calendar while wearing our “I love lamp” T-shirt.

Christmas 2013 might be one of the most memorable yet, since Paramount is bringing us the eternally immature, clueless, politically incorrect Ron Burgundy two days earlier than promised. Anchorman 2: The Legend Continues is set for a Dec. 18 release date — two days ahead of its previous Dec. 20 premiere. Burgundy has been stopping by the set of Conan O’Brien and spoon-feeding us with teasers and trailers for weeks. The news team is back, bigger and better than ever and with a bus. Yes, a Ron Burgundy bus. Let the ’70s magic show begin.