Brandi Glanville has a wild side that she has revealed to the world on more than one occasion. However, she’d like her fans to know she’s not lesbian, even though she tried to be. 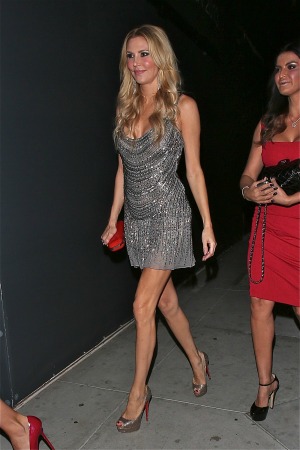 Brandi Glanville is known to try just about everything once and now she even admits that she has even tried to have a little fling with a woman.

During Monday’s episode of The Real Housewives of Beverly Hills, Glanville and her friend Carlton Gebbia took a little trip together to a lingerie store. The episode then suggests the pair had a steamy make-out session after their playful shopping trip.

However, this is not true because the former model admits she has already tried to be with women in the past and it didn’t work out for her.

The beauty took to her Bravo blog to clarify, saying, “As I have said before, I love beautiful women, and Carlton is one of them.”

“However, neither one of us are lesbians. I have actually tried to be, but it just didn’t work out for me. I can’t speak to Carlton’s experiences, because I honestly have no idea what they have been.”

“As you can tell, I am easily distracted by lingerie. In fact, I’m quite obsessed with it and all other things sexy and girly. Carlton’s body looks like it is zero-percent body fat, and she is fun, playful, and non-judgmental.”

Clearly, the experience made both women feel the need to clarify. Gebbia cannot afford to be as wild as her single co-star because she is married, perhaps that’s why she was quick to put any rumors to rest.

Using her Bravo blog as a platform, Gebbia revealed her feelings toward the same sex, saying, “I do honestly feel girls are super powerful and beautiful… I’m OK with that, we really are a very fun species! I adore Brandi obviously, she makes me giggle, but we didn’t bury any bodies… I mean crystals!”

Is it a cry for attention or do girls just wanna have fun?