Carrie Underwood knows she is no Julie Andrews, but will do what she can to bring The Sound of Music back to life in December. 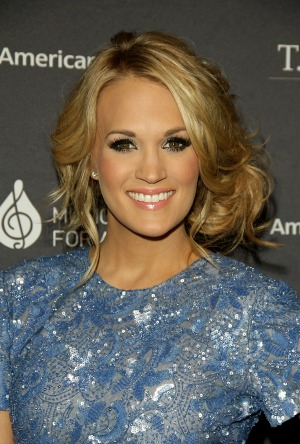 Carrie Underwood took on a big task when agreeing to do the role originally played by Julie Andrews in The Sound of Music. But the singer didn’t know exactly what a big challenge it would be. Underwood shared she has been getting plenty of negative feedback since the news was announced.

“I get hate tweets and stuff like, ‘You’re not Julie Andrews!'” she told Entertainment Weekly, according to the Daily Mail. “I know I’m not Julie. Nobody is and I would never pretend that I was. I know my place.”

Underwood’s version will be slightly different than the original film, which itself was based on a play, based on a memoir. The new version will be aired live on NBC, and will be based on the play rather than the movie, according to the LA Times. It also stars Stephen Moyer from True Blood.

While fans of the original film may not be happy with the revamping of a classic, one person who is happy someone is doing something with the story is Julie Andrews herself.

“I think she’s great. It’s going to be the original show, I believe, and I think after 40 or 50 years, it’s probably time somebody else had a crack at it,” Andrews said via Us Weekly. “I had the best time of my life doing it and it did wonderful things for me.”

The Sound of Music: Behind the scenes

The film was released in 1965 and ended up winning five Academy Awards. Andrews has repeatedly shown support for the project, and knows Underwood has a lot of added pressure on her.

“I think it’s great that it’s being done again, but doing it live must be so daunting,” she added. “I do hope it works for Carrie, because she’s lovely and I’m a fan. I wish her well.”

Underwood has been focusing on her new role, and tweeted about a “making of” documentary on Nov. 26.