Vanity Fair recently celebrated the iconic starlet Marilyn Monroe for its 100th anniversary issue, but someone was very upset with its choice of model and has slammed the mag for not using Kim Kardashian instead… 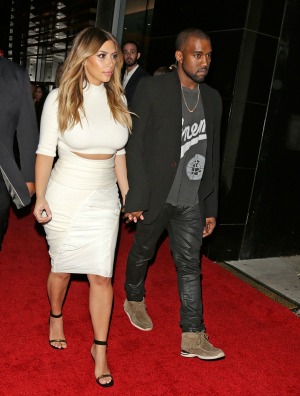 Marilyn Monroe is one of the most celebrated and recognizable figures throughout showbiz history and many women would love the honor of being compared to the late starlet.

We have seen many magazines try to re-create Monroe’s iconic look and the latest has been Vanity Fair magazine, who featured beautiful model Kate Upton styled to look the like The Seven Year Itch star.

The magazine paid tribute to Monroe and Upton for its recent 100th anniversary issue, but someone was very unimpressed by its choice of model and that someone is Kanye West.

The “Black Skinhead” rapper has been enjoying blasting people via radio stations lately and his latest target is now Vanity Fair magazine, because he believes his fiancée Kim Kardashian is the real modern-day Marilyn Monroe.

West revealed to Chicago’s Power 105.1 radio station on Tuesday, “I have a love-hate relationship with the paparazzi but actually I love them because they empower us over ya know Vanity Fair and Graydon Carter that wanna say Kate Upton is Marilyn Monroe.”

We understand West is in love and wants to promote Kardashian as much as possible, but he went one step further to compare himself to industry great Walt Disney and talented artist Michelangelo.

West said, “I’m more like, a Walt Disney or something. Like, rap is just a chamber of my thoughts. It’s something that I really wanted to express as a modern-day poet, because you know, if I had lived in a past lifetime, maybe I would have been a playwright or something.”

That is quite a statement to make and when West was asked whether he may not be worthy of such titles, his answer was simple.

He said, “If anything, that’s a compliment to them! I’m like Michelangelo. Because I’m the new version of that. This is a reality. I’m living inside of a dream world.”