Bless me Father for I have fallen in love with a vampire… or two. But come on! Klaus sheds a tear on tonight’s episode of The Originals and we melt! 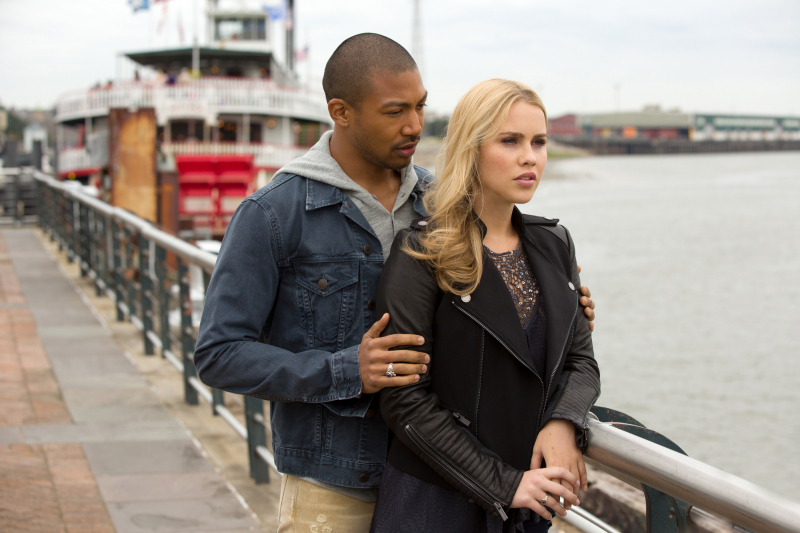 Forgive me Father for I have sinned… every Tuesday watching The Originals when I see Elijah. And Marcel. And Klaus (Joseph Morgan). Tyler is the only one who doesn’t really do it for me, which is great since he got himself locked in Marcel’s garden anyways.

It’s Klaus against the world while we stand in the background jumping up and down, waving our hands and wishing we could scream, “You’re not alone!” Because viewers around the world have his back after tonight’s episode of The Originals.

Rebekah (Claire Holt) switches sides, as we knew, and helps Marcel, only to watch in horror as Klaus kills dozens of Marcel’s men in the first battle of what is sure to be a long war. Or a really short one because Marcel quickly gives over power of the city to Klaus in order to end the slaughter. Klaus is taking his old home back and control of the Quarter. Marcel is sure to point out, though, that loyalty is not something that can be taken. It must be earned.

In a shocking twist of events and opinions, we get a clear picture from Klaus’ point of view defending his actions and actually agree with the guy. Yeah, OK, he’s letting Elijah suffer a bit, but he knew the bite wasn’t going to kill him. And he’s stopped Rebekah from going after Marcel for hundreds of years, but only because Klaus is sure she deserves better.

Klaus is a glutton for forgiveness

He might deserve the punishment just a little, but that doesn’t mean we want to see Klaus go down or see Rebekah conspire against him as the case is tonight. If there’s one theme to safely take away from The Originals it’s the idea of family first. Rebekah needs to decide who her family is and fast. Sure, Klaus needs to stop staking/biting them but, let’s be real, anyone with siblings can relate. Who hasn’t, at one point, dreamed of trapping their sibling in a box for a while?

On the positive side for Klaus, he’s been really nice to Hayley (Phoebe Tonkin) this entire time. He’s listened and consented to his family’s advice. He’s tried his best not to kill people. All in all, the guy is doing a pretty good job. He points this out to his family and says all he wanted them to do was choose him. He just wants their loyalty but, at the first chance, they betrayed him. He’s worried his baby will grow up to know Elijah as his dad. During this speech, he starts crying and we’re done for.

Some things are better left in the past

Back in the bayou, Elijah is recovering from his bite wound while having flashbacks of his past. Hayley meets Eve who is part of her werewolf family. Eve tells Hayley that Davina put a curse on the royal wolf line. They are stuck in their wolf form, only allowed to become human on the full moon.

Eve also warns Hayley to keep her moon birthmark covered at all times.

The episode ends with Cami putting together the pieces of her missing memory. She writes a code for herself so she’ll remember certain pieces of information and finds a picture of Marcel and Klaus from the early 1900s.

Looks like the girl might just have some hope of staying relevant to the show after all. Romance doesn’t look promising between Cami and Klaus, though. That ship has kinda sailed, plus there’s all sorts of talk of a Klaroline reunion right now on The Vampire Diaries.

We’re OK without the romance from Klaus’ side. Elijah and Hayley are enough to keep the slow burn alive for the entire week. Too bad Elijah tells Hayley he can’t be with her (in that way they have of speaking without actually talking) because of Klaus. We think tonight could be a turning point for the original bad boy, though. Perhaps his whole, “keep the siblings single forever,” tirade is getting a little more lax. Here’s to hoping!