The team is sent after a woman that appears to have telekinetic powers, but when the real reason for her bad luck comes to light, secrets in May’s past are the only key to keeping them all safe in “Repairs.” 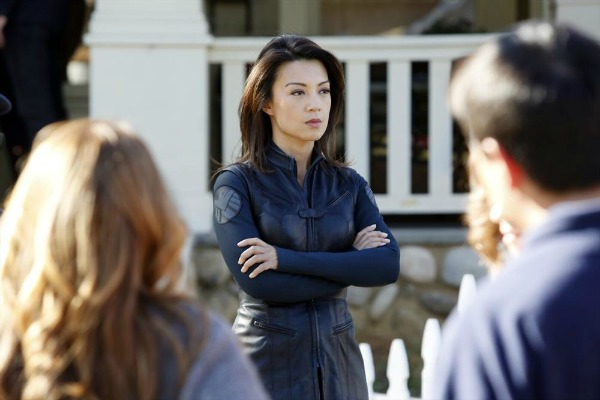 This episode of Agents of S.H.I.E.L.D. kind of made me want to tear my hair out and scream. But wait, before you take that the wrong way, let me just say that I also enjoyed it. How is that possible? Well, the reason that I wanted to tear my hair out is that I started out feeling one way about May in the beginning of the episode and ended up feeling completely differently about her by the end. She had quite a journey in this episode, though in true May fashion, it happened without a whole ton of fanfare on her part.

In my review of last week’s episode, I talked about the final scene where Ward was seen walking into May’s hotel room. I tried with all my might not to take that to mean that they were sleeping together and even hoped that perhaps Ward went in there for a nice, long talk.

So of course the beginning of this episode stomped all over that dream and not only was it made clear that Ward and May slept together that time, but many other times in the past as well. Heck, they had a whole routine figured out to keep their dirty little secret safe. Now, as I said before, I really do like May, but I just don’t know if she’s the right woman for Ward. Granted, I felt more strongly about that opinion in the beginning of the episode when she was just a cold-hearted woman with a mysterious past. By the end of the episode, the mystery of the “cavalry” nickname was solved, I found out how much pain she’d been through on that mysterious mission and she’d even managed to play a little joke on her teammates.

All of that being said, I still have to go with my initial gut reaction and say that I still believe that Skye is a better match for Ward. I think that Ward and May are too much alike right now and I like the idea of Skye softening him up. Plus, I really love the idea of May and Coulson together. While this episode did open my eyes to a lot more facts about May, it didn’t do anything to change my mind about where I think the romance belongs. Is it possible that I could end up changing my mind about all that in the future? Sure, but that’s the fun of watching TV.

Coulson totally blowing Fitz-Simmons’ minds when he knew all about anti-particles and big bangs.

Coulson’s flying tackle to save the guy from getting hit by the truck.

Coulson deciding to lose his tie before talking to Hutchins.

Fitz smacking Skye’s hand away from the hologram.

Ward nearly losing his cool when Skye said that May needed to get laid.

Skye’s quiet conversation with Hannah through the wall.

“Did she lose anyone in there?”
“Herself.”

Fitz screaming like a little girl when they stumbled across his prank.

“You can’t undo what’s been done. That will be with your forever.”

May’s voice getting softer and softer as she kept asking Tobias to let Hannah go.

“What did you say to him?”
“The same words you said to me in Bahrain.”

Everyone laughing their butts off when Fitz came in with shaving cream on his face, and May’s little smile from the cockpit.

What did you think of this episode of Agents of S.H.I.E.L.D.? Were you surprised to find out what happened to May in the past and did it change your opinion about her?