Alec Baldwin is firing back after getting the axe from MSNBC on Tuesday, and he says there’s a lot of blame to go around for what happened. 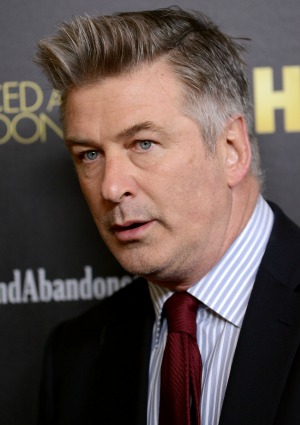 Who is responsible for getting Alec Baldwin fired? Not Alec Baldwin, certainly — at least, that’s what the actor says.

The cable news network canceled Up Late with Alec Baldwin after a controversy about the actor using racial slurs blew up, then news broke that he reportedly said he didn’t “give a f***” about the needs of a staffer with cancer.

Now Baldwin is telling his side of the story, and everyone else gets most of the blame with only a teeny-weeny bit for himself.

“The woman using that dressing room, I was told she’s allergic to some chemical, no one ever ever ever said to me that somebody had cancer, and I never said ‘I don’t give a f***,'” he said.

Baldwin is also sticking to his story that he never called anyone a “f****t.”

“Showing a video in which I call someone a ‘c*** sucking something’… you can’t really tell what I’m saying, and we live in a world in which the phrase ‘TMZ’s enhanced audio’ exists. ‘TMZ’s enhanced audio,'” Baldwin said. “And then with the Post… there’s nothing you can do when you get thrown in this washing machine, nothing… All you end up doing is just defending yourself all day long.”

“I dispute half the comment I made… ‘f****t’ is not the word that came out of my mouth. That I know,” Baldwin continued. “But you’ve got the fundamentalist wing of gay advocacy — Rich Ferraro and Andrew Sullivan — they’re out there, they’ve got you. Rich Ferraro, this is probably one of his greatest triumphs. They killed my show. And I have to take some responsibility for that myself.”

If you’re counting, so far we have the angry staff member, TMZ, the New York Post and the “fundamentalist wing of the gay advocacy” all to blame for Baldwin’s recent unemployment — but wait, there’s more.

Baldwin also is furious that another MSNBC host is getting off easy for saying something he deems far worse: That someone should defecate in Sarah Palin’s mouth for comparing Obamacare to slavery.

“Martin Bashir’s on the air, and he made his comment on the air!” he protested.

Tell us: Should Alec Baldwin have been fired?