Joan Rivers has never kept her mouth shut. On Tuesday, she threw her support to Alec Baldwin in a shocking way. 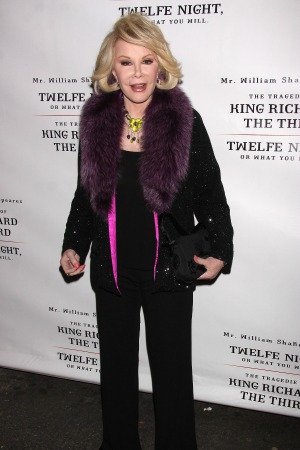 Even though Alec Baldwin was fired from MSNBC on Tuesday, the volatile actor does have his supporters. Count Joan Rivers as one who is speaking publicly in support of Baldwin who lost his job over a gay slur.

In a video obtained by TMZ, the 80-year-old comedienne gets right to the point and doesn’t hold back.

She told the cameraman, “What do I think about Alec Baldwin [getting fired]? Everybody just relax.”

While that might seem like some pretty zen advice from the saucy TV personality, that wasn’t all she had to say. Rivers then launched into a speech that included just about every racial slur out there in the English vernacular.

Will this get Rivers in trouble with E! now? It didn’t work out so well for Baldwin when he hurled the homophobic remark to a Fox News reporter. The incident initially got him a two-week suspension from the cable news network, but he was fired this week when MSNBC realized he was a liability for the station.

Rivers continued to dispense advice after she dropped almost every offensive word possible.

She said, “Be thankful that we’re all living in America and everybody stop getting so damn uptight.”

While you might think those are wise words coming from the sharp-tongued funny lady, she still got in the last word.

“And this goes for the Indians as well, both dot and feather,” she concluded.

Joan Rivers is never at a loss for words.