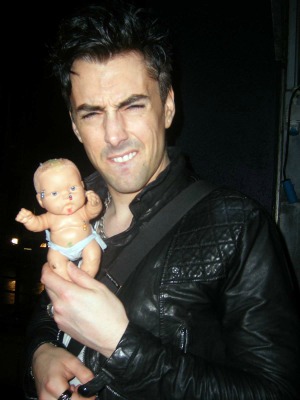 It’s a disgraceful day in Hollywood as former Lostprophets frontman Ian Watkins has pleaded guilty to child sex offenses and the illegal possession of child pornography.

The sickening acts that Watkins has been charged with include attempted rape and sexual assault of a baby.

Fans of the former Lostprophets star are disgusted and deeply saddened by the news that their hero could commit such vile acts.

Talking to your kids about sexual abuse >>

The 36-year-old rocker appeared in Cardiff Crown Court today. Having originally faced 24 separate sexual offense charges, he decided to make a last-minute change of plea and pleaded guilty to 11 charges, nine of which were unchanged and two of attempted baby rape, as opposed to rape.

The “Rooftops” singer claims that he does not even remember committing the acts because he was severely influenced by a heavy concoction of Class A drugs.

However, there was no denying that the depraved acts did occur because the court was presented with video evidence which shows an identifiable Watkins filming the attempted rape of an 11-month-old baby that belonged to a twisted fan.

The horrific event is said to have taken place in April 2012, the day after the Lostprophets final album “Weapons” was released and police found evidence of Watkins recording the abuse that took place in several hotels across London and south Wales.

Protecting your kids from sexual predators >>

Prosecutor Chris Clee QC told the court, “Ian Watkins was the lead singer in a successful band called the Lostprophets. He accepts he was a determined and committed pedophile.”

The judge, Mr. Justice Royce, informed the jury that they would not have to be a part of the horrific case, informing them: “There will not be a trial in this case. The defendants have all pleaded guilty to nearly all the charges against them… You have been saved from having to watch extremely graphic and distressing material.”