Kelly Clarkson told Today why she had to let the cat out of the bag about her pregnancy so early: All the puking. 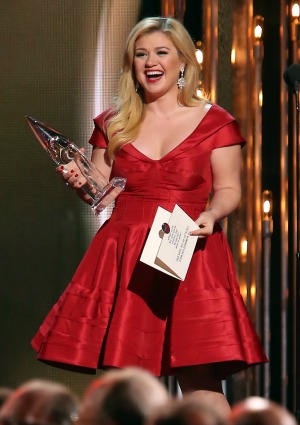 Singer Kelly Clarkson told the world she and new hubby Brandon Blackstock are expecting their first child together with an effusive post on Twitter, but the American Idol winner said she really wanted to wait a while before the announcement.

Still in her first trimester, Clarkson said she wanted to get a jump on the rumors that were already starting to heat up.

“I was just dying to tell people, but we were trying to wait until the end of my first trimester,” she told Savannah Guthrie during an interview on Today.

“But everybody kept talking about it and I had to cancel something because I’ve been so ill. I didn’t want people to think that I’m canceling because I’m lazy or something. So, we just told people. But we had a really good reason.”

And all that puking is no fun, she said. “I don’t know why they call it morning sickness because it’s like all day and all night,” she explained. “I’m super-excited about being pregnant. I’m just looking forward to the second trimester. They say it’s better.”

And while Clarkson does not yet know if she’s carrying a girl or a boy — it’s “way too early to know,” she said — she does already have both a boy and a girl name ready. However, if you’re hoping she’s going to tell us before the birth, don’t hold your breath.

“We’re not saying because I don’t want someone to steal my baby’s name,” she said, probably only half-joking.