Her Royal Hairness Kate Middleton has axed her stylist after he betrayed her in the worst way possible: Using her image without the permission of the palace. 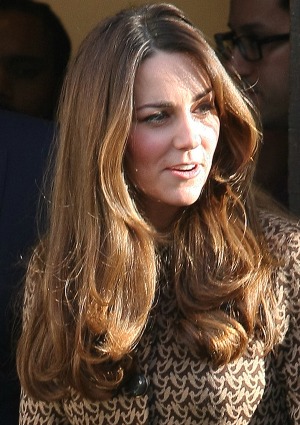 Kate Middleton’s hair makes headlines across the world, but now the man in charge of those royal tresses has gotten the axe.

James Pryce, who styled the hair of the Duchess of Cambridge for the royal wedding and her first international tour of North America shortly thereafter, was reportedly canned by palace officials for the ultimate betrayal: Using Kate’s photos for self-promotion without her permission.

An insider said when Pryce got a taste of fame after the royal wedding he decided to go it alone and left the tony Richard Ward salon where he first made a name for himself. He then tried to cash in with his own American tour, riding on the coattails of his most famous client.

The source told the Telegraph, “When he went solo and tried to tour around the USA — he launched a Facebook page and Twitter account which featured hundreds of pictures of Kate and her various hairstyles to promote his business — obviously, that did not go down too well with the palace at all.”

“Richard Ward still cuts Kate’s hair and she has her color done at the salon,” the insider said.

“Plus, she has her stylist, Amanda Cook Tucker, who blow dries her hair for events, but James has really been pushed out.”

Tucker was spotted entering the hospital after the birth of Prince George with several wardrobe options for the new parents and helped give Kate the glamorous waves she showed off to the press that day. She was also reportedly flown in to the couple’s royal tour of the South Pacific last fall to tame Kate’s tresses, which were becoming quite unruly in the heavy humidity.

Kate has reportedly booked Aussie stylist Joh Bailey for her 2014 tour of Australia with Prince William — the same stylist who tended to the late Princess Diana’s iconic locks back in 1996.