Britney Spears’ life is finally in a good place and that is partially in thanks to her beau David Lucado. The pop princess has revealed exactly how she feels about him… 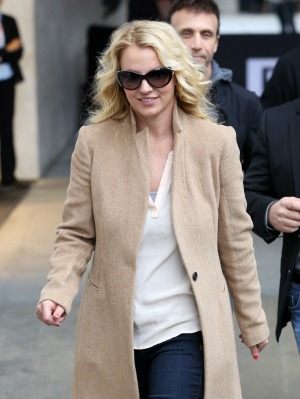 Britney Spears has not always been lucky in the love department, and so we are very pleased to see just how happy and normal she looks with her new man David Lucado.

The pair have been together since March and while many may have originally thought Lucado was just a rebound for the “I Wanna Go” singer following her split from fiancé Jason Trawick, they’d be wrong.

Eight months have passed and Spears is filled with happiness and love for her new relationship. In a touching interview, she revealed to Rob Marciano of Entertainment Tonight (which will air tonight) exactly how she feels about her man.

“I’m in love,” Spears admits. “I like the fact that he’s very stubborn and he’s stuck in his ways.”

“He’s just a simple man. I adore him. He’s really funny and he’s really passionate. I love the fact that anything he’s involved in he’s passionate about, and it’s contagious.”

However, the “Work B****” hitmaker’s dad Jamie Spears was quick to do a background check on his daughter’s new beau before things between them got serious.

When asked about whether the background check rumors were true, Spears said, “That is true. My dad’s a little crazy like that.”

She may be deeply in love but that doesn’t mean the pop princess will be heading down the aisle any time soon, although, she would love to give her two boys Sean Preston and Jayden James another sibling in the near future.

For all her past heartbreak the “Stronger” singer at least have something to show: her forthcoming record Britney Jean.

She explained to Entertainment Tonight, “I would say [the album] was kind of like therapy for me. It just kind of transformed me. As you write something your perspective changes. So, it was like my ‘good therapy record.'”

“I’m an artist, so I think there are periods in everyone’s life where you get kind of reclusive, your creative outlet is cut off. Then sometimes it flows and you’re like, ‘Oh my God, this is what I need to be doing,’ [which makes] it easier for you to be the artist that you want to be.”

“I love what I do, I mean, there’s been days where it’s been harder for me than other days, of course… [but] my philosophy is to just take each day at a time.”

We love what Spears does, too, and we are glad to see her life is in such a positive place right now!