Kanye West does not like to hear the word “no” and because of this he has launched yet another war of words. This time, his focus is on French fashion house Louis Vuitton… 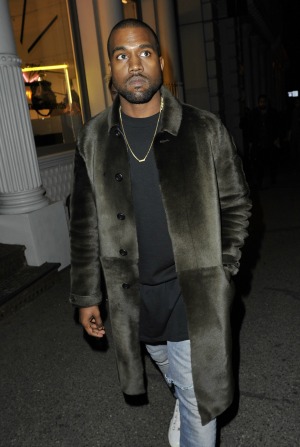 So what did Louis Vuitton do that could have possibly been so bad? It said “no” to Kanye West, a word he very seldom hears.

Louis Vuitton vice president Yves Carcelle would not agree to see the rapper during his recent trip to Paris and West is not impressed.

The “Bound 2” hitmaker revealed his feelings about the brand to radio station 92.3 NOW, saying, “I wanted to meet with [Yves] in Paris. He said ‘I don’t understand why we need to meet with you?'”

“Everybody in New York City right now, don’t buy any Louis Vuitton until after January. Now do you want to meet with me?”

“Now do you want to meet with me? Influence. They think that I don’t realize my power.”

There is no doubt West is on top of his game and one of the most popular people in the music industry, but whether the residents of New York City intend to adhere to the rapper’s commands remains to be seen.

This is not the first time the “Yeezus” rapper has waged war on Louis Vuitton, having previously told Power 106’s Big Boy’s Neighborhood radio show, “If I had the opportunity to design for Louis Vuitton now I wouldn’t because the prices are just too extreme and I don’t want to use my message to have kids saving up that much to be a part of what the ideas are.”

“That’s the problem to me with luxury,” he said.

Of course, West was not alone at the interview. He had brought along fiancée Kim Kardashian, who has not left his side, and later sang her praises during another interview with 95.5 WPGC station, claiming Kim and the rest of the Kardashian clan are changing the world for the better.

“I’m not talking about me, I can hop on a plane. I can date a white woman, I can date a black woman, and no matter what they say in the barbershop don’t matter, because I don’t get my hair cut there.”

“For the people that do, though, there’s a white woman that’s getting talked down to by her friends because she’s dating a black guy.”

“Now you’ve got a point of reference, that you can say, ‘Well, actually this couple right here, that’s dope.”‘