Even though Kelly Rowland hasn’t confirmed the news of her engagement yet, that sure looks like a rock on her finger in the Instagram video. 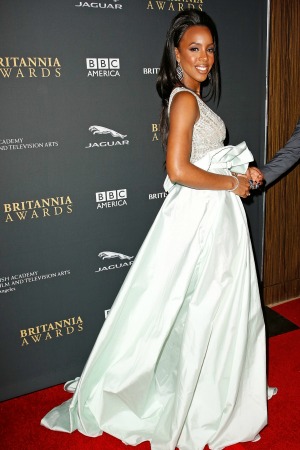 Another Hollywood celebrity is taking the plunge. This time, it’s Kelly Rowland who is engaged to her boyfriend and manager Tim Witherspoon. While she hasn’t made a formal announcement yet, someone spilled the beans to Us Weekly on Monday.

A source told the gossip site, “She has been showing [the ring] off to friends and family and is very happy. She wants to… enjoy [it] and celebrate for a bit longer.”

Lauren Conrad on engagement: “I had no idea it was coming” >>

The former Destiny’s Child member and her fiancé have reportedly been dating for a while, but Rowland has kept their relationship out of the media. However, the wedding rumors have been circulating since February when Media Takeout claimed the singer was already married to the music manager.

The site wrote, “Kelly and Tim have been together for years, and decided to get married. Kelly wants to keep her sexy singer image alive, so she’s keeping everything a secret. Most people didn’t even know she had a boyfriend.”

While that story turned out to be false, the frenzy heated up again when she turned up in J. Que Smith’s Instagram video in mid-November. She wished the songwriter’s son a happy birthday. When she blew him a kiss in the video, a nice-sized rock flashed on her left finger.

Rowland was previously engaged to NFL player Roy Williams. The couple ended their engagement in January 2005 just months before the wedding.