Malin Akerman and her husband Roberto Zincone have called it quits on their relationship after six years of marriage and just seven months after their son’s birth. 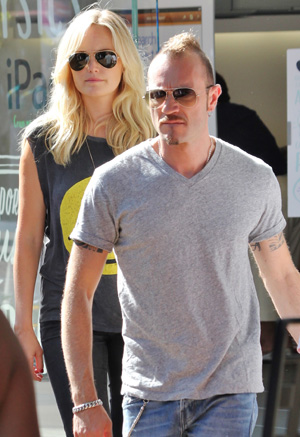 Marriage is over for Malin Akerman after she and her husband of six years, Roberto Zincone, announced they’re ending their relationship after 10 years together and following the birth of their son seven months ago.

Sources for US Weekly confirmed on Monday that Akerman and Zincone are going their separate ways and want to make things as easy as possible for the sake of their little boy, Sebastian.

“It’s as amicable as can be, and they want to do what’s best for their son,” the source revealed, while a second insider is insisting the couple has “no plans to file” for divorce yet. Apparently, the split has been hard on Akerman, 35, as she’s “not even ready to discuss it. It’s a very sad time for her.”

Ironically, the Trophy Wife actress just said in September that she and Zincone get along so well and never “had one single fight.” She added that she and the Pedalstones drummer “always talk things out.” Additionally, when their son was born, the pair said they were incredibly excited to become parents together, and prepped an incredible nursery for the baby. A pal also gushed about them, saying that “there’s a lot of love in that house.”

At the moment, there is no word on what caused the split, as both Akerman and Zincone appeared to be very happy in their marriage until now. For the time being the happy-couple-no-more is living separately, but it’s unclear who the baby is staying with.