Ariana Grande looked Jessica Rabbit-sexy at the American Music Awards on Sunday, but she also had the sultry cartoon character’s diva-esque behavior down pat. 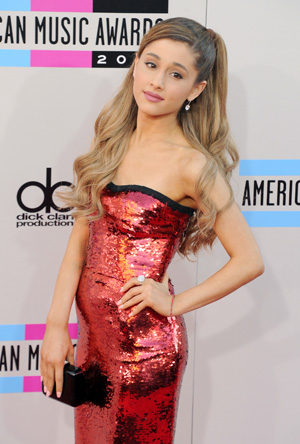 When Grande reached the photo-taking area of the red carpet during the AMAs, the tiny star had a bit of a fit when photographers began flashing their cameras at her. A source at the event told Hollyscoop that Grande “took one step on the red carpet and said, ‘I can’t do this, the flashing is making me nauseous.'”

Everyone was ordered by the award-winning songstress’ rep to stop aiming their flashes at her. But since that’s their job, and they need the flash, photogs continued to snap away. So to appease Grande, the rep then asked for the picture-takers to stop shouting her name as she posed. This still did not make her happy.

Apparently, Grande was not feeling well that evening and had reportedly posted a slew of tweets telling her fans how sick she felt. However, it seems she deleted those messages, as they are nowhere to be seen on her account.

On a good note, Grande won the Artist of the Year award and was super-happy about it, thanking all her fans for their votes. “I love you guys so so so much. that’s all I’ve been thinking. thank you times a million”

The AMAs official Twitter also posted a congratulatory tweet to the 20-year-old’s fans. “Congrats #Arianators, all your votes + support paid off. Tweet us why you’re proud of @ArianaGrande for winning #AMAs New Artist of the Year”

The young singer’s powerful voice brought the place down during the awards show with her semi-acoustic version of “Tattooed Heart.” She earned praise from the likes of Lady Gaga and Ciara, getting a standing ovation from both, as well as the rest of the audience.