The new promo for Season 3 of Sherlock dives head first into the world of social media. It’s letting Holmes’ Twitter followers spread the news that, yes, Sherlock has returned from the dead. 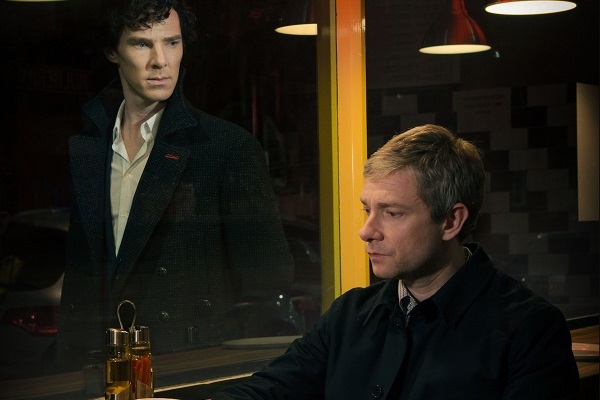 There’s a new Sherlock teaser and it’s utilizing Twitter to make things more interesting. In the newest video to help prepare fans for Holmes’ return, viewers watch as fans of the detective take to social media to share their surprise and excitement about one particularly interesting fact: Sherlock is alive!

Despite being based on a seriously old series of books, Sherlock is no stranger to modern technology. In the first episode of the first season, we watched people’s text messages pop up onto our television screens. Later, we watched as Watson curated Sherlock’s web page and told readers about the cases they were attempting to solve.

Sherlock’s fan base is well connected, too. Tumblr is littered with fan sites devoted to Sherlock‘s actors and story lines (real and imagined). The show, which stars Benedict Cumberbatch (Star Trek‘s Khan) and Martin Freeman (The Hobbit), has a surprisingly young demographic, possibly much younger than showrunners anticipated. The recent swell in anglophiles undoubtedly has something to do with that.

In fact, the recent promo is a fairly accurate interpretation of what the internet looks like any time something new happens with Sherlock. When Cumberbatch was picked up for Star Trek, his fans (lovingly called “Cumberb****es”) overwhelmed the web with excitement and suspicion. When Sherlock flung himself from a roof during last season’s finale, Tumblr was awash with fist shaking at showrunner Steven Moffat. And, when the show’s long-awaited return date was finally announced, even more fans rejoiced.

Take the plunge! Sign up for our newsletter and get TV news in your email >>

This year, Sherlock will make its American debut around the same time as when it will first air in the U.K. Usually, Americans are forced to wait several months. It’s being paired with Downton Abbey this season, meaning it ought to pick up even more new fans.

Sherlock returns on Jan. 19, and we’re counting down the days.