They’re here! Kim Zolciak has given birth to a girl — and a boy! 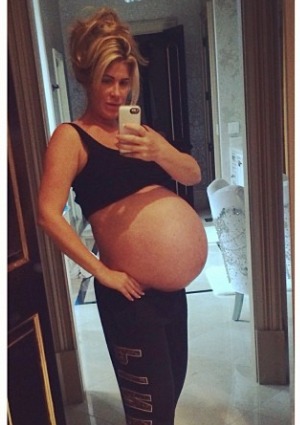 Reality star Kim Zolciak is a mom again times two today. The Real Housewives of Atlanta celeb has given birth to twins, and has been blessed with both a girl and a boy!

Zolciak, who is married to Atlanta Falcons defensive end Kroy Biermann, announced the news on Instagram — sans pic of the cuties, unfortunately.

“Guess what?!!! The TWINS have arrived!” Zolciak told fans this morning. “We welcomed first a baby girl and second a handsome little boy. They are both healthy, and Kroy and I are so thankful!!”

“We are officially the ‘Biermann Bunch’ now!” she added, making a reference to The Brady Bunch and their large blended family that includes six kids, including the newborns.

“The twins names are: Girl: Kaia Rose (After ‘Psychic’ Rose who is like a grandma to me and been a huge part of my life for 13 plus yrs) Also the twins were born on the Rose’s birthday!” she explained. “Boy: Kane Ren (Ren After my OBGYN who has delivered 5 of the 6 kiddos, who has also been a big part of my life for 12 yrs and we simply adore him).”

Just a week ago the “Tardy for the Party” singer posted a major preggo pic on Instagram, showing her belly off to the world.

“Sooooo with all the request I finally decided to post My baby bump today! The twins will here this month and we are soooo excited and I’m soooo over being pregnant! #countingdownthedays.”

Zolciak announced she was having twins in August. She told E! News, “I’m having twins and I couldn’t be more excited. I was completely shocked. I had no idea. It was a natural conception, but twins do run in the family, so I guess I shouldn’t have been surprised.”

“I can’t believe I am going to be a mom to six children,” Zolciak exclaimed. “It’s going to be very busy, but it’s a dream come true.”

Zolciak has two daughters from previous relationships, Brielle and Ariana, who have been adopted by Biermann. The couple have two sons together aside from the new one, Kroy Jr. and Kash. Those twins are in good company!