After watching Miley Cyrus get pornographic with a foam finger and Robin Thicke at the VMAs, we all held our breath to see how she’d outdo herself at the 2013 AMAs. Say what you want about Cyrus — she’s no dummy. She didn’t move an inch during her AMA performance, and yet we’re still talking about it. Here’s why. 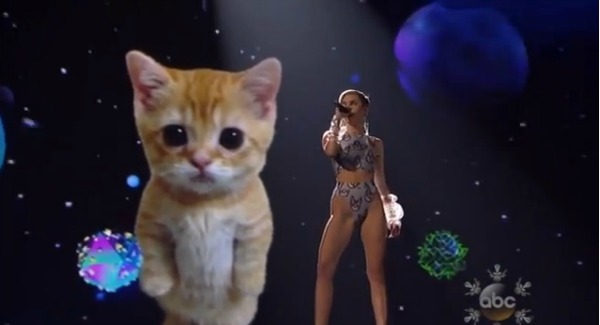 Artists from Madonna to Beyoncé to Mariah Carey have been accused of lip-synching during what was supposed to be a live performance. Miley Cyrus belted out “Wrecking Ball” live and in living color. At the beginning, she was what American Idol‘s Randy Jackson would have described as “pitchy,” but by the end she brought down the house with her vocals. It’s obvious she sang live because she took some pacing liberties with the song, and gets out of sync with the gigantic kitten in the background (who is lip-synching).

Miley Cyrus gets an unexpected surprise for her birthday >> 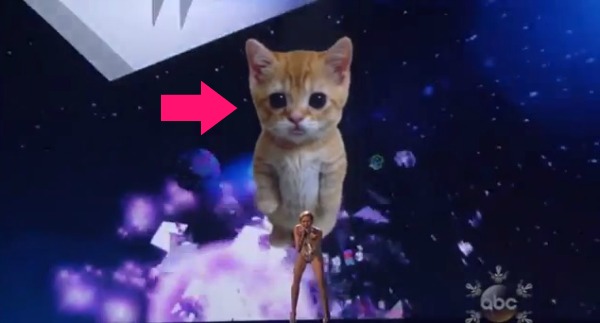 Speaking of one gigantic kitten

Here is where we bow to Cyrus. Without molesting a foam finger or grinding a married man, she has us all saying “WTF” for different reasons. Many viewers were offended by Cyrus’ buck-naked ride on a wrecking ball in her “Wrecking Ball” video. Wardrobe choices notwithstanding, the video made sense. It had a wrecking ball in it. What the hell has a crying kitten got to do with broken hearts and wrecking balls? Zilch. And therein lies the genius of it all. It makes zero sense and is designed to make zero sense, so we’re all left saying, “What the f*** is that supposed to mean?”

As a quick aside, when we were watching a Godzilla-sized kitten in space cry, we couldn’t help but wonder about the graphic designer who got stuck trying to make a cat look like it’s singing “Wrecking Ball.” How do you dress that up for a résumé? Career highlight: “Uh, sat in a dark room for a couple of weeks trying to make an animated kitten look like it was singing for Miley Cyrus’ AMAs performance.” We have to ask: Is that kind of cool, or kind of not cool? 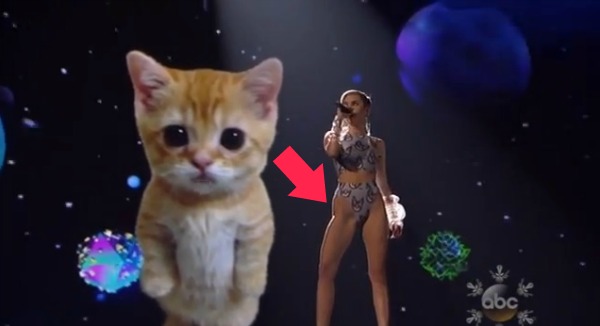 This is why French-cut bottoms went out of style

Those of us who remember our moms trying to pull off French-cut swimsuits were scarred for life at a young age, and we know precisely why they were left back in the early ’80s where they belong. Cyrus proves why they become obsolete. She’s a young girl with probably 4.5 percent body fat, and it’s not a good look on her. Not matter how many times and ways she tries this look, we just want to gently say, “It’s not going to happen. Sorry.” While the pattern on this outfit is super-cute (if you’re 10), the kitties are see-through, and one is placed right on Cyrus’, er, crotchal region.

Where did Miley Cyrus’ eyebrows go? >> 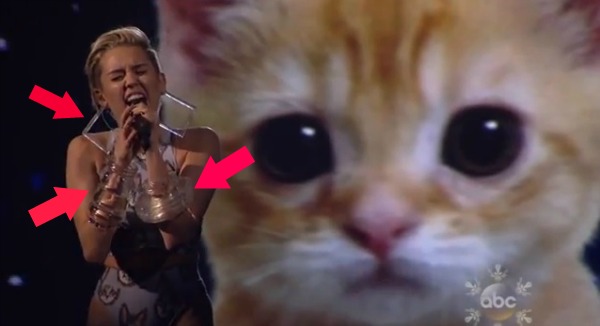 Is oversize plastic jewelry going to be a thing now?

Please note Cyrus’ oversize plastic jewelry, because we’re certain that will become a thing now. (Again, did we learn nothing from “jellies” in the ’80s?) If you have a teenage girl on your Christmas list, better start hunting down some plastic jewelry now.

What does it all mean?

So what does it all mean? What is the grander scope and mind-bending meaning of a kitty spiraling in space weeping? Are our non-musician brains just unable to grasp such infinite concepts? No. If we were going to give Cyrus credit she may not deserve, it is perhaps a sarcastic jab at innocence, since the AMAs aired on ABC and there really is nothing more innocent than kittens. But we’re pretty sure it means nothing. All it probably means is that Cyrus figured out a way to steal headlines without moving a single inch on stage, with all her (admittedly scant) clothes on. Well played, Miley. Well played.