Kendall Jenner may have been spotted with Harry Styles last week, but we couldn’t help noticing how cute she looked on Sunday night standing next to another teen pop sensation — Austin Mahone. The two presented an award together at the AMAs, and we wondered: Could they be the next power couple? 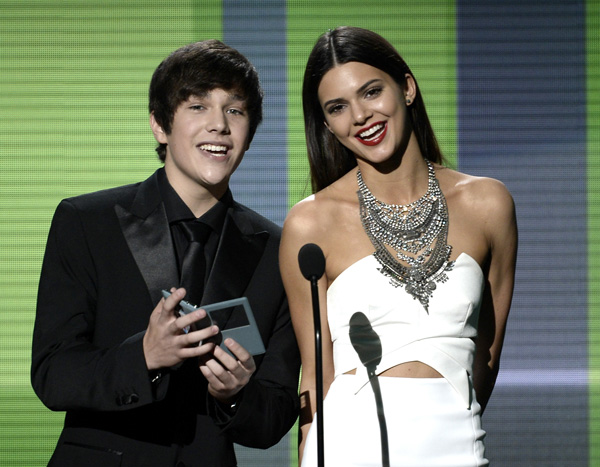 Why they’d work: He’d get a kick out of her big family

Everyone this side of the stratosphere is familiar with Kendall Jenner’s huge family — and the kraziness that comes with being a part of the Kardashian clan. And while some guys may be intimidated by the kind of closeness (and drama) Jenner shares with her siblings, we don’t think it would scare Mahone off. Since his father died when he was only 2 years old and he was raised by his single mother, we bet he’d enjoy being in the thick of the shenanigans pulled by Kendall, Kylie, Kim, Khloe, Kourtney, Rob, Brody and Brandon. Besides, since he told E! this year at the Kids’ Choice Awards that he really liked Jenner and thought “she’s beautiful,” he’d likely hang out with anyone if it meant getting to spend time with her.

Why they might not work: He’s younger than her

When it comes to dating, a man’s age should be looked at like reverse dog years. You’ve probably heard it before and you’ll probably hear it again — men mature much more slowly than women. While Jenner being 18 years old and Mahone being 17 years old might seem like a narrow margin, you’ve got to subtract a few years for the longer male maturity gestation period. Sorry, fellas… it’s just a fact of nature. In his defense, Mahone seems more mature than most of other teen pop fellas out there.

Why they’d work: They both want to make it big

Hailed somewhat controversially as the next Justin Bieber, Mahone got his start posting videos on YouTube in 2010. Since then, this enterprising cutie has managed to land a record deal, release two singles and nab a few trophies at big awards shows. Sporting a similar drive to succeed, Jenner signed on with Wilhelmina modeling agency at age 14. She began her career doing print campaigns for brands like Forever 21 and magazines such as Teen Vogue, but Jenner recently set her sights on the catwalk. In addition to strutting her stuff, she and lil’ sis Kylie collaborate on a fashion line.

Why they might not work: They both want to make it big

Yep, this one’s both a pro and a con. While their shared commitment to their careers could give them something to bond over, it could also be the thing that keeps them apart. I mean, didn’t we see how that played out with Jenner’s big sis Kim and pro football player Reggie Bush? It’s not like these two would need to be attached at the hip — after all, they’re young… they should be enjoying at least some modicum of freedom — but they should probably share the same ZIP code every now and then if they’re going to be photographed looking all lovey-dovey and adorable in Us Weekly.