In Delivery Man, Vince Vaughn’s got something to hide. He secretly tries to parent a group of adult children he never knew he had. 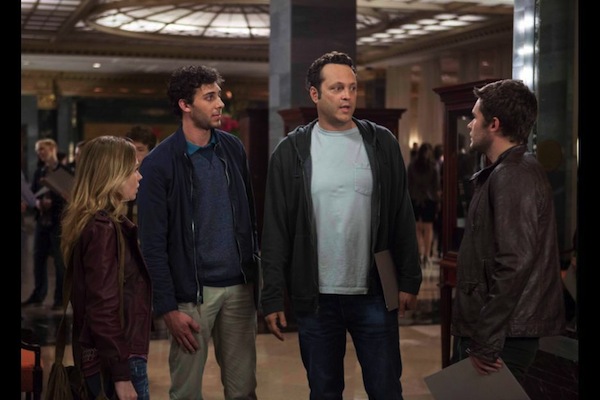 You know that awkward moment when your unsuspecting kids meet each other for the first time? No? Well, David Wozniak (Vince Vaughn) does. He’s at the center of a huge paternity suit in DreamWorks’ Delivery Man.

INTERVIEW: Delivery Man cast on how being parents affected their roles >>

Over 20 years ago, David made a donation to a sperm bank. Through a company mix-up, he ended up fathering 533 children. Out of that bunch, over 100 of them are suing to uncover his identity. At the same time, David is expecting his first bundle of joy with his longtime girlfriend Emma (Cobie Smulders).

After spending his life as a screwup, David wants to make a change. Even though he’s advised to stay away from his 500-plus children, he can’t help himself. One by one, he anonymously finds a way to interact with them.

In the following clip, David’s lies almost catch up with him. Four of his children — including Kristen (Britt Robertson), Taylor (Amos VanderPoel) and Josh (Jack Reynor) — run into each other, putting David in an awkward position. He tries to stick to a fake story that explains how he knows them all. It’s hilarious to watch as he weasels his way out of the situation without blowing his cover.

Check out the clip below


Will the kids find out what David’s really up to? You’ll have to watch the movie to find out.