Hello, sweeties! If you’ve not watched “The Day of the Doctor” yet, save reading this until later. Spoilers! 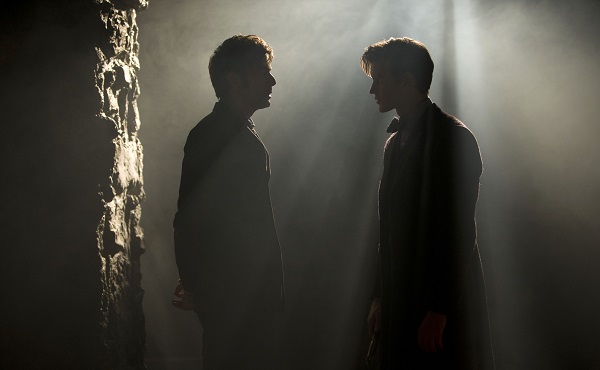 Welp, Whovians, most of you have no doubt made it through the Doctor Who 50th anniversary special, “The Day of the Doctor.” And, since you’re reading this, we assume you made it out alive, right?

We caught Elizabeth I’s return before anyone else >>

The show zoomed back and forth between 16th-century England, the relatively present day and the time of the great Time War. Many will remember that when Christopher Eccleston came careening onto our screens in Season 1 of the return of Doctor Who, he’d just come out of the Time War. In this special episode/movie/feature/piece of art, we traveled back in time to the very moment the war needed to end, which fell on the shoulders of the War Doctor (John Hurt) — the version of the Doctor who was born out of conflict as a warrior in order to save the universe by, ultimately, destroying his own planet.

Except he didn’t! When Clara and Eleven jumped into the Doctor’s timeline, they caused tears in the fabric of his time, enabling the War Doctor and Ten and Eleven to all end up together — first, for the wedding of the Tenth Doctor (David Tennant) to Elizabeth I, and then on to the present day to investigate a break-in/out at the secret royal archives. Just as Ten and Eleven were once again sitting down two species in talks to save Earth, Clara realized that the War Doctor was visiting them just before he destroyed Gallifrey and ended the war. He had hold of the weapon called “The Moment” when the weapon’s conscience arrived in the shape of Billie Piper. Serving as a sort of Ghost of Doctors Future, she accompanied him to the present day with the other two Doctors and was there, again, when Ten and Eleven showed up to help the War Doctor end the war so he wouldn’t need to do it alone.

Why we love them: Matt Smith and Jenna-Louise Coleman troll Whovians at Comic-Con >>

With a pep talk from Clara (Jenna-Louise Coleman), however, the men realized they didn’t need to end the world. They could simply freeze Gallifrey, and in its absence, the surrounding Daleks would obliterate themselves with their own crossfire. So, Ten and Eleven (Matt Smith) and the War Doctor surrounded Gallifrey to help freeze it. Then things got infinitely better when, out of nowhere, all the other Doctors arrived in their TARDISes — and together, they saved Gallifrey! It was bloody fantastic, and if you’re anything like us, you were probably in a fit of tears and giggles.

Sadly, of course, the War Doctor and the Tenth Doctor had to return to their own timelines, and because of the “wibbly-wobbly, timey-wimey”-ness of it all, they wouldn’t be able to remember that they had actually saved Gallifrey instead of destroying it. However, the Eleventh Doctor knows… and he’s ready to find his home. Brilliant, right? 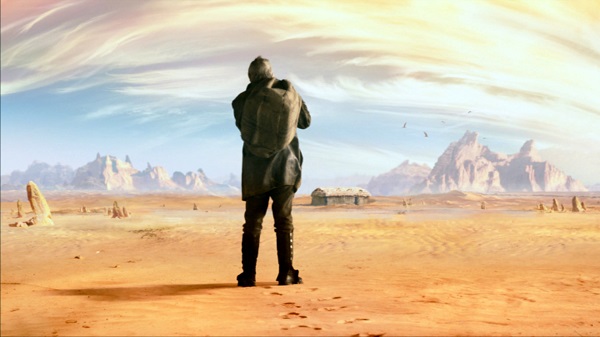 Actually, it was fantastic

We always enjoy it when Steven Moffat and the gang endeavor to incorporate snippets of the previous Doctors into shows. This time, though, they went above and beyond. First and foremost, if you follow Who rabidly, you know of the mini webisode that set up the existence of the War Doctor. That was just what we needed to clear up who, exactly, John Hurt’s character was supposed to be. At the end of the episode, his getting back into his TARDIS and regenerating into the Ninth Doctor put the whole timeline into perspective. At least it will until Moffat throws another wrench into our perceived reality — again.

At the very end, you may have caught another familiar face. The curator was, indeed, another Doctor. It was Tom Baker, who played the Fourth Doctor. He’s gotten a wee bit older since his reign between 1974 and 1981, but his cameo was one of the highlights of the special. In a way, that inhaler-dependent scientist (we’ll call her “Yes”) kept us ready and waiting for Baker the entire time. After all, she was wearing his scarf. Eleven said he never forgets a face, but did he really understand who he was talking to and why? Even more intriguing: What did the Fourth Doctor mean by “revisiting” some other familiar faces? Are we being set up for even more cameos from past Doctors? (Oh, please, yes!)

Another great moment was seeing the eyes of the Twelfth Doctor (Peter Capaldi) when we saw glimpses of all the other Doctors joining in to save Gallifrey. Eleven hasn’t officially regenerated yet. He won’t for about another month. But, since Eleven and Twelve share a timeline and memories, the latter obviously knew what was going on. It’s very cool — like bow ties and the fez — that they included him in that very special moment.

Truth be told, we’ve been a little hesitant to accept Clara. It’s hard to compete with the likes of Rose, Wilf or the Ponds. She came into her own in this episode, though. We first warmed to her when, during the spring finale, she leaped into the Doctor’s past to try to help him. Then throughout this special, she continued to throw out the great, funny quips we love from companions. Plus, she really held her own against the three Doctors. It was really Clara who saved Gallifrey, as she gave the Doctor the confidence to be himself.

Want more TV news? Sign up for our fantastic newsletter >>

It was after the War Doctor disappeared and the Tenth Doctor returned to Rose when “The Day of the Doctor” really seemed the most special to us. As the Doctor waxed poetic about living the life of a curator, we began to wonder whether maybe the impending regeneration into the Twelfth Doctor wouldn’t lend itself to a throwback to previous Doctors who spent more time at U.N.I.T. When Baker appeared, however, and reminded the Eleventh Doctor that somewhere out there, Gallifrey was lost and waiting to be found, we witnessed a new direction and goal light up Eleven’s face. When he regenerates during the Christmas special, we know exactly where Twelve will want to go: home.

And we can’t wait!