While a lot of shows will be dark this Thanksgiving, Glee will be full of stuffing when Demi Lovato and Adam Lambert guest-star with the Muppets in “Puppet Master.” 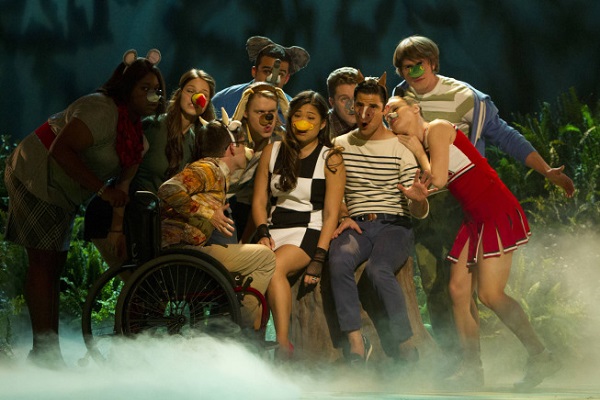 After you’re done eating your Thanksgiving meal, kick up your heels and get comfy because Glee will be on the air to entertain you. They’re bringing double the fun with Muppet versions of all your favorites.

The official synopsis reads as follows:

“Demi Lovato and Adam Lambert guest-star in an all-new episode airing on Thanksgiving. Blaine (Darren Criss) believes he has the best plan to win Nationals, but he doesn’t take the glee club’s criticism too well when the students accuse him of being too controlling.”

There’s also word that we’ll get a look into the meaning behind the tracksuit worn by Sue Sylvester (Jane Lynch).

During a recent interview with Matthew Morrison (Will), SheKnows got the inside scoop as to why in the world there are Muppets on the set of Glee. Apparently, there will be a gas leak at McKinley High, and Blaine will start to see everyone as Muppets! Happy hallucinations to you, Blaine.

Check out these groovy preview photos and get in the mood! 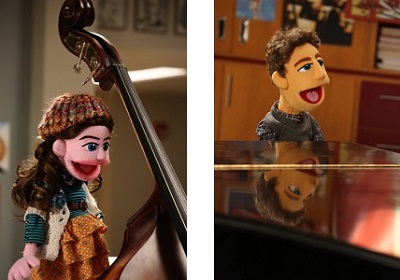 Do you recognize these beauties? They’re Marley (Melissa Benoist) and Will! Who said a Muppet couldn’t perform?

The photo on the left depicts Muppet versions of Sam (Chord Overstreet), Will, Kitty (Becca Tobin), Artie (Kevin McHale), Unique (Alex Newell) and Tina (Jenna Ushkowitz). The photo on the right shows Becky (Lauren Potter) together with her Muppet doppelgänger. Don’t they make the cutest pair?

Can Glee run away with the People’s Choice Awards? >>

Kitty, Jake (Jacob Artist) and Tina play with their Muppet selves on the left while the Muppets of Santana (Naya Rivera), Elliott (Adam Lambert), Rachel (Lea Michele) and Kurt (Chris Colfer) perform solo on the left.

Santana, Elliott, Rachel and Kurt pop up beside their fuzzy selves both seated and standing in this pair of photos.

On the left, New Directions performs with their Muppets, and on the right, Blaine and Sam seem to be morphing into some sort of puppets themselves while they tackle a song.