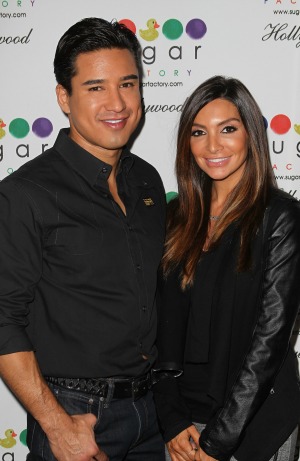 Mario Lopez and wife Courtney finally debuted their baby boy Dominic, more than two months after welcoming him to world. Dominic was born Sept. 9, and accompanied his parents to his very own debut event.

The Lopezes held their “Sip & See” event in Glendale, California on Saturday, Nov. 16. Friends showed up to see Dominic for the first time, as well as snack on popcorn, cookies and cake. The family — Mario, Courtney, Dominic and daughter Gia — showed up in matching black-and-white outfits.

“So this is Dominic Lopez! My son’s sip-and-see, which is essentially a baby shower, post-birth, because you just sort of sip cocktails and you see the baby!” Lopez said to family and friends at the event, according to Extra.

“She always wants to help me with his pacifier and feed him. She’s a very good big sister and a very good helper.”

Mario Lopez runs in his skivvies! >>

Lopez’s extended family flew to California specifically for the event, and experienced highlights of the West Coast.

The X Factor host was excited to see members of his family he doesn’t see on a regular basis, including his grandmother.

The party was for Dominic, but was a great opportunity for the actor to bond with all of his family. Since the party, Lopez has been busy posting photos of baby Nico on his Twitter page, and it’s obvious he’s a proud papa.

Lopez was asked if the couple was planning to try for baby No. 3, and it sounds like they’re already one step ahead.

“Oh, we’re working on it! We’re definitely going to go for the tiebreaker,” he said. “We’ll reassess after that.”