Kim Kardashian is reportedly worth over $40 million. So why does she need to pocket 90 percent of the proceeds from her charity auction? 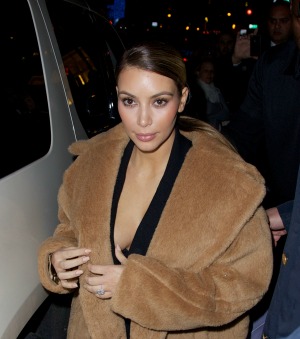 When Typhoon Haiyan struck the Philippines in early November, many people all over the world stepped in to help raise money for those in need. Kim Kardashian decided to pitch in with an eBay auction from her designer closet. While that sounds noble, there’s one caveat to her donation—only 10 percent of the proceeds go to charity.

On Thursday, the 33-year-old reality star tweeted out the link to the auction. A personal message was included on the site about why she was moved to help out those affected by the disaster.

Will Kim Kardashian finally get her coveted Vogue cover? >>

“Hi guys, this is a very special auction because a portion of the proceeds of my eBay auction are going to International Medical Corps, a nonprofit organisation [sic] that provides critical health services on remote islands where families are struggling to access medical care and basic resources like food, clean drinking water and vital medications,” she wrote.

The E! star continued, “The proceeds will go directly to the communities they’re serving in the Philippines and will help typhoon survivors get access to medical care and ultimately save lives. My prayers and thoughts are with those affected by the typhoon. Check out my eBay auction here and support those who need our help in the Philippines. Xo.”

Some of the items she is auctioning off include designer clothing from Dolce & Gabbana, Stella McCartney and Alexander McQueen. There is even clothing from the Kardashian Kollection. The oddest thing up for bid is her Fila workout gear including jogging bras.

Currently, the most popular item is a Chanel black-quilted shoulder bag selling for $1,625. No one has bid on a Fila teardrop-back tank which starts at only 99 cents.

While her intentions are good and it’s always important to help those in need, it’s unclear where the other 90 percent of the profits are going in this charitable auction.

Kardashian is also feeling the heat from her fans on the internet about donating only 10 percent of the proceeds. Over the weekend, the wording on the eBay auction was changed from spelling out the amount going to charity to “a percentage of the proceeds from all my auctions will benefit the International Medical Corps.”

A good deed sometimes gets a celebrity in hot water.