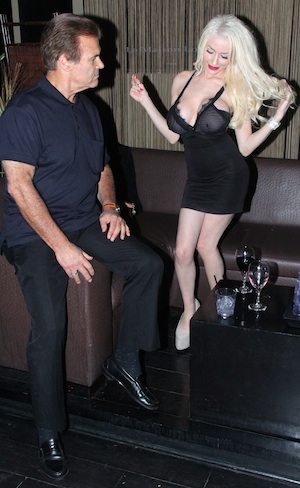 Courtney Stodden — the teenager famous for nude photos and her failed marriage to 53-year-old Doug Hutchison — is finally ready to move on from her divorce.

Stodden and Lozzi were photographed together at the Pop, Fashion & Sport event at Le Maison nightclub in Studio City, California where Stodden danced at a VIP table in a black see-through dress that clearly showed off her recent breast augmentation. (In June 2013, Stodden went public with her decision to enhance her breasts to a DD-cup size). It looks like Stodden and Lozzi enjoyed wine and some sort of cocktail.

So just who is Stodden’s new sugar daddy? Lozzi owns a well-respected public relations firm in Beverly Hills and was a former White House aide under the George H.W. Bush administration. His agency has included such clients as Zsa Zsa Gabor, Francesca Hilton and Lou Ferrigno.

Lozzi is likely attracted to Stodden for the same reasons he found romance with his ex-girlfriend, the late Anna Nicole Smith. Photos of Lozzi and Smith bear an eerie resemblance to the photos taken of Stodden and Lozzi last night.

News of Stodden and Hutchison’s split was unsurprising given the couple’s bizarre relationship. Yet while Hutchison seems to hiding out post-breakup, Stodden was instantly ready to enjoy the single life.

A source for Radar Online says Stodden’s breakup with Hutchison is a move toward independence. “Doug’s world has been turned upside down, but for Courtney, it’s far from that. She is embracing singledom. It’s clear she has finally emerged to able to call all the shots.”

And what about rumors of a book deal? Stodden denied that report and added, “I don’t read or write.” Wonderful. So what’s next for Stodden after her divorce from Hutchison is finalized? “Right now, I want to focus on kind of starting over again.”

If that’s how Stodden really feels, then she and Lozzi make a perfect couple.