Katherine shows her age tonight on The Vampire Diaries. Not by losing more teeth but by suddenly being the wise do-gooder. 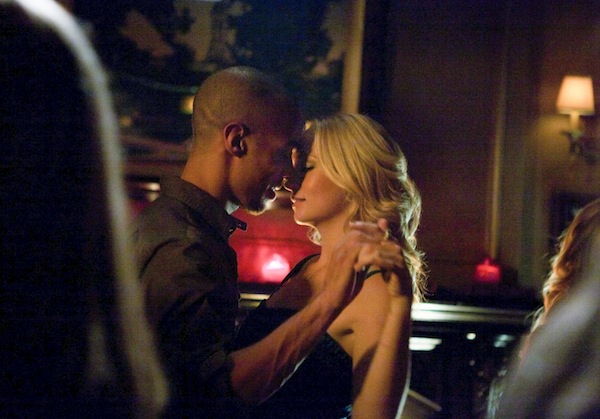 There’s nothing to say about Season 5 of The Vampire Diaries except yes, yes and yes! It’s hard not to gush each week over the spectacular writing and amazing storylines that have us twisting and turning every step of the way. Caroline’s (Candice Accola) character is fantastically cheeky. Elena (Nina Dobrev) is back to being the cool girl. Stefan (Paul Wesley) is rocking the whole James Dean thing while Damon (Ian Somerhalder) is snarking his way into our hearts. Life is good. Well, we can’t exactly say that for every character on the show. It wouldn’t be The Vampire Diaries without a lot little killing.

Jesse escapes from Dr. Wes Maxfield and asks Caroline for help. She and Elena come to the rescue, showing Jesse just how cool and exciting being a vampire can be. This part is a little too cheerleader-ish for me, until it turns horror movie. Thank goodness.

Jesse isn’t just a vampire. Wes’ experiments have led to a vampire-eating vampire. That’s right, Jesse craves the blood of other vampires. When he takes a bite out of Damon, Elena does the only thing she can. She stabs Jesse, killing him. Caroline is not pleased. Well, that didn’t last long. It’s OK though. Do keep in mind that Klaus will be returning to the show in the near future. That should make Jesse’s passing a lot more bearable.

Katherine gets her mom on

It makes sense that after living for hundreds of years, you’d acquire some useful knowledge, but who knew Katherine was so, well, useful. She diagnoses Stefan with PTSD, and the two bond over her ability to help him through his panic attacks. She even remains calm as he nearly strangles her to death.

Then, she easily rids Matt of his traveler parasite Gregor. But not before Gregor tells her The Travelers want Katherine dead. Katherine isn’t really interested in hanging around waiting for The Travelers to catch up with her when she’s dying anyway. She decides to speed up the process and jump off a building.

Luckily, Stefan catches her just in time. No cheesy bonding lines afterward, though. Instead, Stefan just tells her, “Hey, you’re Katherine Pierce. Suck it up.” But the way he says it, with that cheeky grin and piercing eyes, makes Katherine, and all of us at home, turn school girl. 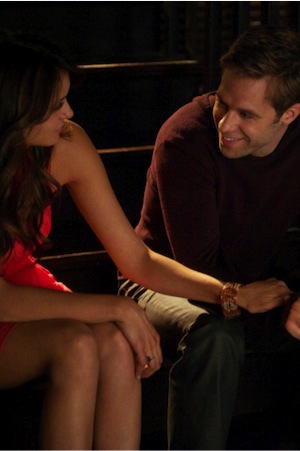 Bonnie is loving college, especially because she has so much free time to sign up for classes with Jeremy. All the time. And they have a lot of classes to catch up on. You get the hint.

The problem is, just as she gets Little Gilbert without a shirt, some dead person shows up ready to pass on to the other side. Bonnie finally has to admit the issue to Jeremy. He doesn’t much mind, though, when she tells him his kisses are worth the consequences of being the anchor. Cue more signing up for classes.

Caroline has some deep-seated Damon mistrust

The small jabs from Caroline about Elena’s relationship with Damon start this episode and end in her all-out admission that she won’t stop warning Elena against Damon unless they’re no longer best friends. Caroline is convinced Damon has changed Elena. Not for the better. This turn around in Caroline’s attitude is kind of sudden, but it makes sense. Caroline always did have a soft spot for Stefan.

Still, we can’t help but disagree. Call it our blind adoration for all things Ian Somerhalder, but we love seeing him get the girl. Yeah, he’s got his issues with killing people, but who doesn’t have issues? It’s all about compromise right? OK, OK, OK, he’s got some things to work through. That doesn’t mean true love won’t prevail.

True love is going to have to wait awhile, though, since Damon gets himself locked in the cell of Dr. Wes Maxfield’s Society. Good old Wes has more tricks up his sleeve than anticipated. And Damon has more secrets hidden in his.

Turns out, Damon knows a lot more about the Augustine Vampire than anticipated. In fact, he was the Augustine Vampire in the ’50s. They tortured him. We catch vague glimpses of his past as they experiment on him strapped to a table. No wonder he has issues! See, Caroline just needs to take some time to understand a vampire that kills might just be a tortured soul reaching for help.

Anyways, Damon’s past is coming back to haunt him since Wes gets the upper hand, vervains Damon and tells him The Society will be happy to have him back. When Damon wakes up, he’s in a cell with the initials D.S. carved into the wall near his head. It isn’t the first time Damon’s been locked up there.