It’s hard to believe Madonna’s daughter is already old enough to be thinking of college. But will she return home to where Madonna grew up and attend the University of Michigan? 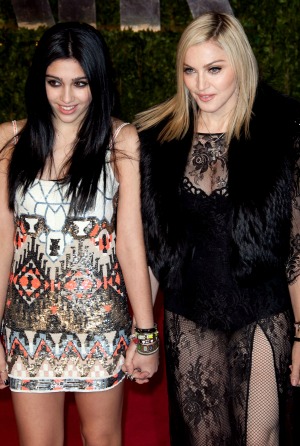 Madonna‘s daughter Lourdes is 17 years old and looking forward to her future. It appears the Material Girl wants her daughter to move to her home state, because the two were spotted together on the campus of the University of Michigan on Wednesday, Nov. 20. As you might expect, the visit caused quite the frenzy among students on campus.

6 MTV VMA acts that were way raunchier than Miley’s >>

Lourdes Leon currently attends LaGuardia High School in New York, a performing arts school. According to E! News, one student tweeted that, “she’s in the music deans office… ***debates skipping voice lesson to stalk her*****.” Because of Leon’s interests (not to mention her mom’s career), a major in music would make sense. The New York Daily News reports that Leon was recently cast in her high school’s production of Grease.

Madonna isn’t a stranger to the Michigan campus. She is a Michigan native and attended the university for a short time before deciding to follow her dreams and move to New York. And she has obviously thought about her daughter’s college path.

“I want my daughter to go to school there,” Madonna told the NFL Network before Superbowl XLVI. “I keep telling her, Ann Arbor is an awesome place.”

Although the singer has a college-aged daughter, sometimes it’s still hard to believe. She is still breaking rules and wearing whatever she wants (earlier this year, she was warned by Instagram for posting racy photos on the photo-sharing site).

Madonna was just named the highest-paid musician of the year. But despite who her mom is, Leon appears to just be a normal teen, mostly. She has been dating, although her reported boyfriend is a TV star.

Michigan may be one of many colleges Leon and Madonna visit, but it looks like the singer would like her daughter to be closer to where she grew up.