He acted in the show and now it’s his real life. Party of Five actor Scott Wolf and Kelley Limp are adding a fifth member to their family. 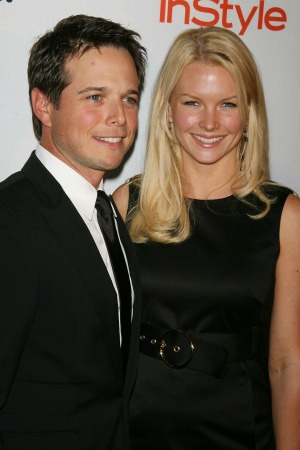 Scott Wolf is going to have his own Party of Five now that he’s announced his wife Kelley Limp is expecting baby No. 3. The couple, married nine years, are expecting their first baby girl in May 2014. The couple already has two sons, Jackson, 4, and Miller, 1.

In a statement to E! News, the family shared, “Our two boys are pure magic and the light of our lives. So unbelievably happy that they get a little sister, and we get a baby girl. Can’t stop smiling these days.”

The 45-year-old actor currently has a recurring role on the TNT series Perception while Limp, a former cast member of Real World: New Orleans, is a life coach. Now that they’ll be a true five-person family, it seems like Wolf was always in on the joke.

He explained to Billy Bush on Access Hollywood, “I will be the first to say, yes, we are a party of five.”

He also tweeted out his excitement his followers.

Family has always been important to the dad of (almost) three. He and the former reality star originally made their home in Santa Monica, California, but decided to move so their kids could have a more normal life. They currently live in Park City, Utah and Wolf commutes to work.

Wolf gushed about his sons to People magazine just after the birth of Miller. “Jackson was a tough act to follow, but so far Miller is nailing it.”

We bet baby girl Wolf will make dad proud, too.