Jennifer Lawrence appeared on The Late Show with David Letterman Wednesday night and detailed her hilarious experience with poop and the emergency room. 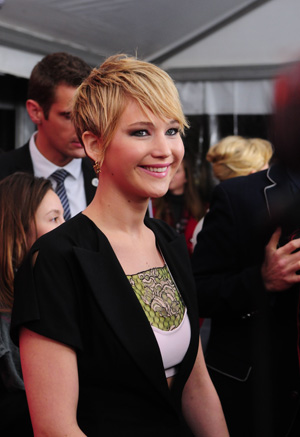 Known for bringing humor to any situation, Jennifer Lawrence spoke about a crazy ordeal she endured when she was rushed to the emergency room after non-stop pooping and bad stomach pains.

Lawrence detailed a recent ER trip due to a three-week-long stomach ache that was accompanied by multiple daily trips to the toilet.

“I thought I had an ulcer, and it turns out it was a fulcer — grhh!” Lawrence joked with David Letterman during his late-night show. “I just had this really bad pain for like three weeks, and you can only s*** your pants so many times a day before you, like, have to go to the emergency room, before you’re like, ‘I need to go to the hospital!'”

Letterman seemed out of words for a minute before exclaiming, “It’s like talking to Helen Hayes!”

Lawrence continued on with her ordeal, explaining how she had to go through a procedure to find out what was wrong with her.

“I just did this thing yesterday called an [endoscopy], where they put me to sleep,” Lawrence said. “I’m a freaking head case, so I was in there like, ‘What are these? What does that mean? What does that say?’ And then they were putting me to sleep and I could see the stuff like coming towards me…”

As she felt herself going under, the nurse kept telling her to “think of someplace peaceful,” but all she said before passing out was, “I’m paralyzed!” Then, when she woke up she was asked if she had had any pleasant dreams.

Jennifer Lawrence is an Oscar loser >>

“Uh, yeah, I dreamt there was nuclear bomb going off…” The Hunger Games star said, pretending to be under the influence of anesthetics.

Lawrence made headlines earlier for another potentially awkward situation while wearing a wet suit during much of the Catching Fire filming.

“I was surprised at how little camel-toe problem there was,” Lawrence said referring to the tight outfit’s tendency to accentuate a woman’s private parts. “I was expecting a lot more.”

Check out JLaw as she describes her ER experience to Letterman: