After a meteoric rise to fame caused him to dive into addiction, Eminem says one thing got him through it all: Hip-hop. 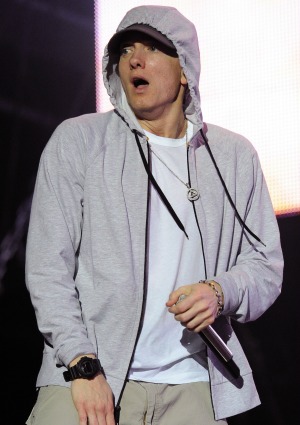 Guess who’s back? The real Slim Shady, platinum buzz cut and all. While Eminem says a relapse into addiction nearly took him out of the game permanently, his one savior, hip-hop, brought him back from the brink again.

The “Berzerk” rhymer sat down with Rolling Stone and talked about that 2005 relapse.

“I relapsed on drugs. It was a little creepy,” he told the mag. “I certainly had some dark times with that s***, mostly due to taking a lot of pills and f***ing drooling on myself. It was a s****y time.”

“I know I probably shaved a few years off my life.”

The star explained that his various addictions began as a cover for his crippling stage fright.

“Early in my career when s*** started happening so fast, I think it was more liquor than anything. I was using it was a crutch more for anxiety to go onstage,” he explained.

“I’m not saying I wouldn’t have become an addict if I never got famous… It was more about ‘I need this onstage — I can’t handle this many people looking at me,'” he admitted.

“I always joke that it’s a hell of a career choice for somebody that doesn’t really like attention.”

But despite fame making his addiction worse, Eminem gives music full credit for him being alive today.

“Hip-hop saved my life, man. It’s the only thing I’ve ever been even decent at,” he said. “I don’t know how to do anything else. I think they have a word for that — what do they call it? Idiot savant?”

And his biggest inspirations? None other than Tupac and Biggie.

“Being a student of hip-hop in general, you take technical aspects from places,” he said. “You may take a rhyme pattern or flow from Big Daddy Kane or Kool G Rap. But then you go to Tupac, and he made songs. His f***ing songs felt like something — ‘Holy s***! I want to f***ing punch someone in the face when I put this CD in.’ Biggie told stories. I wanted to do all that s***.”

Read the complete interview with Eminem in the new issue of Rolling Stone, available on newsstands Nov. 22.

Own Eminem’s childhood home for the low price of $1
Eminem crushes Lady Gaga on Facebook: 60 million fans
Eminem goes “Berzerk” on a Kardashian