In a surreal explosion of vibrant colors, captivating costumes and bewitching lyrics, Katy Perry’s latest video showcases cinematography unparalleled in her earlier work. Could the inspiration have come from her failed marriage? 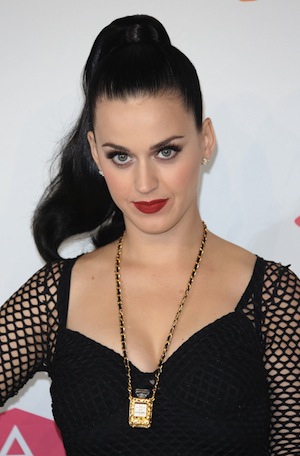 Besides prepubescent teens bustling with dewy puppy love, real men and women know the plight of an impassioned heart.

Some musicians have it tougher than others, especially when they want to express their pain through their talent. Katy Perry has skated on her bubbly personality for a long ride, but her latest album Prism enabled a darker Perry to emerge.

“Unconditionally” is a track about unconditional love, and it’s a video you may never forget.

Perry is striking with her dark hair and fair skin, bright blue eyes and outfits to match. A few soulful ballads dot her musical canvas, but none are displayed quite like “Unconditional.” It’s a drowning portrait of fall and winter palettes and broken dreams. Perry has never looked more beautiful, yet also appears damaged, and consequently she has never felt so real.

Is the latest engagement news about Katy Perry true? >>

MTV had the chance to sit down with director Brent Bonacorso who is responsible for the vision behind this work of art. Profound scenes adorn the video: Perry is hit by a car, alluding to the power and spontaneity of love. A bed is lit on fire, suggestive of both passion and how love can burn you.

Another violent event in the video aside from the car crash is a tornado of flowers. The vibrancy and near-suffocating visuals are intended to parallel the crash, but signify that love can be both harsh in its introduction into your life but beautiful to experience.

The video is a minefield of varying interpretations, impacting the viewer particularly when they notice the contrasting scenes of Perry in the snow and then in the ballroom. Could it be Perry’s version of Inception? MTV thinks so. One world could be a dream and the other a reality, but it’s up the viewer to figure out which is which.

And did you go crazy when you saw Hedwig? (Forgive the Harry Potter reference if that’s a no.) The video ends with a grand appearance from a smoky-colored owl. Bonacorso says of Perry’s interaction with the owl and the symbolism behind it, “She lets it go into the world, and that literally [is] letting this force within her go wild.”

Keep track of all your favorite musicians by signing up for our newsletter — never be the last to know again! >>

Those are the interpretations the director may have had, but what are yours, readers? The video may be different, but its messages are not. But what else is new besides the video itself is the version of Perry we see — her expressions, the pain she releases as she performs and the lyrics combined just have us thinking: Could this be her final farewell and acceptance of her marriage to Russell Brand?

It just cuts so deep, we can’t help but think it is.

Even if you disagree with that, she’s undeniably captivating, and so is this video.