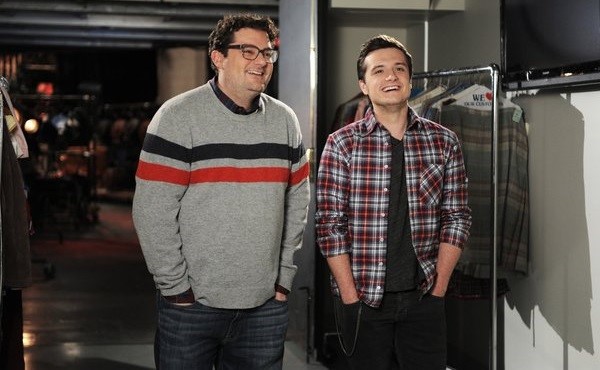 In case you missed the mid-show announcement on last weekend’s Saturday Night Live: The Hunger Games‘ Josh Hutcherson is hosting SNL this weekend! Joining in on the fun is the unbelievably talented sister group, Haim.

Hutcherson is the funniest… at least he thinks so >>

If the previews are any indication, Hutcherson is set to rock Saturday Night Live. In the many snippets he filmed alongside Bobby Moynihan, Hutcherson was pretty funny. As it turns out, he is actually one of the youngest hosts SNL has invited onto the show. When he confessed to being a mere 21 years old, Moynihan promptly “punched” him in the face. Of course, he quickly apologized.

“It’s all right. My jaw can handle it,” Hutcherson responded, earning another punch from Moynihan.

Of course, it was a fake punch. Everyone knows that if Moynihan had landed a real blow to Hutcherson’s razor sharp jawline, he’d probably have bloody knuckles. Oh, that jawline. So hot. But we digress.

The promos also include a tribute — see what we did there? — to Kat and Peeta’s flaming outfits during The Hunger Games by adding horrible flame graphics to one of the promos. They extinguish the fires by blowing on each other and then carrying on with the promo. It was simple, but good for a quick laugh.

Hutcherson isn’t the first of the The Hunger Games: Catching Fire cast to find himself on the Saturday Night Live stage. You may remember his co-star Jennifer Lawrence hosted an episode back in January. Will Liam Hemsworth take the stage next? Of course, we hope so. But we’re certainly more than giddy for Hutcherson’s appearance. According to the actor, he has “so many ideas” for skits! Hopefully, they turn the hottie loose and let him have fun for a while. We’re sure he’ll keep us in stitches.

Most important, we’re hoping for at least one spoof on his oh-so-awesome The Hunger Games.