Disney has premiered a new trailer for Muppets Most Wanted. The highly anticipated sequel has everything you need: Stars, music and of course, the Muppets. 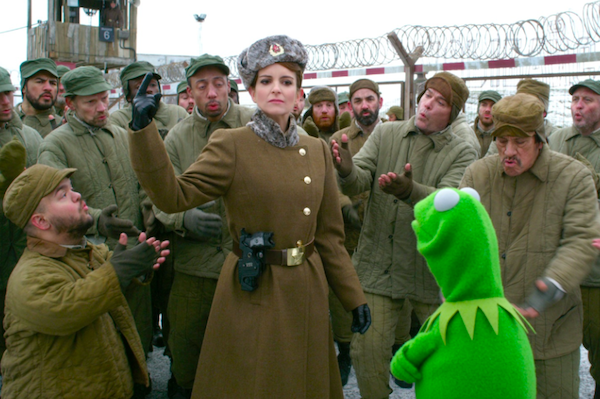 The Muppets are back for another caper in Muppets Most Wanted. Following their 2011 reunion, the gang travels to Europe for an international tour. Unfortunately, one of their own finds himself in a whole heap of trouble.

Somehow Kermit the Frog gets tangled in a dastardly web of lies and intrigue. He’s a doppelgänger for one of the country’s most illusive criminals — Constantine. The only thing separating the two is a harsh accent and a strategically placed mole. Both of which can be easily altered.

After his latest heist, Constantine decides to switch places with Kermit. He hits the road with the Muppets, while Kermit rots in a prison courtesy of a guard called Nadya (Tina Fey). Constantine also gets help from his sidekick Dominic aka Number Two, played by Ricky Gervais. So it’s up to the remaining Muppets and Interpol agent Jean Pierre Napoleon (Ty Burrell) to free Kermit and bring Constantine to justice.

Like the previous film, Muppets Most Wanted is filled with cameos from stars such as Salma Hayek, Ray Liotta, Danny Trejo, Tom Hiddleston, Christoph Waltz and many more. The film is directed by James Bobin, who co-wrote the script with Nicholas Stoller. Unfortunately, Jason Segel and Amy Adams aren’t returning. But at least Walter’s still in the picture.

Check out the Muppets Most Wanted trailer below: