As news of Ginnifer Goodwin’s pregnancy flies across the internet, we wonder if this means that Mary Margaret will also have a bun in the oven on Once Upon a Time. 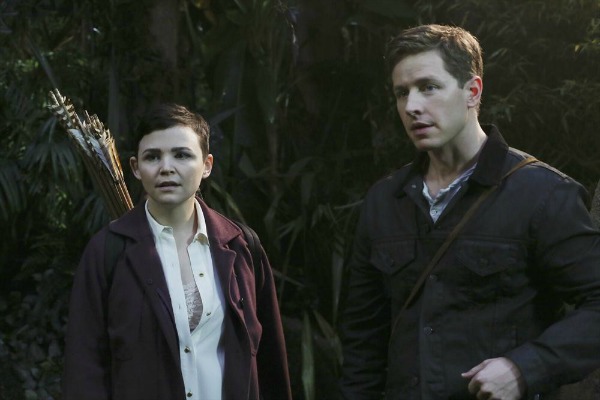 Now that Ginnifer Goodwin has announced that she and husband Josh Dallas are expecting a baby in real life, could a new baby be coming for Mary Margaret and David on Once Upon a Time?

On the show currently, the fairy-tale couple has been having a pretty rough time of it. First their grandson Henry was kidnapped by the evil Peter Pan and then they had to board a ship to Neverland with their grown daughter, Henry’s other mother the evil Queen, a pirate with questionable morals who is after their daughter and Henry’s other grandfather.

Once they reached Neverland, the dangers only continued and soon David had been poisoned and was only days away from dying. He refused to tell Mary Margaret and it wasn’t until Hook saved his life that he finally admitted to his wife how much danger he’d been in. To make matters worse, the cure that saved David’s life may also trap him in Neverland.

In a moment of truth, Mary Margaret admitted that she was sad that they missed out on all of Emma’s growing up and said that she wanted a new baby. Now it appears we know why the writers put that little nugget into fans’ brains. With Goodwin expecting a baby of her own, will Mary Margaret get her wish on the show and have a new baby?

If David and Mary Margaret do decide to have another baby, that could lead to a whole lot of complications. Right now, there’s no guarantee that David can leave Neverland without dying, so that would mean that Mary Margaret might have to have a baby there. That sounds like a very bad idea on all counts. Even if they do make it back to Storybrooke, there’s no guarantee that more danger won’t follow them back. In fact, considering how their lives have been so far, it would be more surprising if danger doesn’t follow them home.

Either way, it sounds like having a new baby will be a challenge for Mary Margaret and David, but it may still happen unless the show decides to try and hide Goodwin’s pregnancy.

What do you think? Will David and Mary Margaret have another baby on Once Upon a Time or will the show go with the age-old tradition of trying to hide Goodwin’s baby bump?