Chris Hemsworth and his wife Elsa Pataky are going to be parents a second time around after announcing they’re expecting another baby. 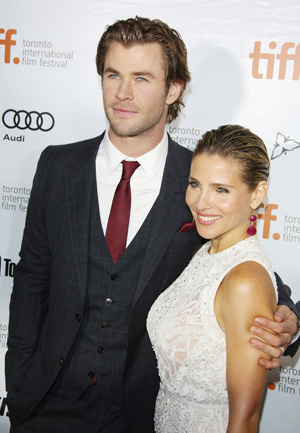 A second baby is on the way for Chris Hemsworth and his wife, Elsa Pataky!

Hemsworth, 30, who’s well known for his title role in the widely popular Thor movies, and Elsa Pataky, 37, didn’t wait long to give their 18-month-old daughter India Rose a sibling, his rep confirmed.

Chris Hemsworth has had near-death experiences >>

Liam Hemsworth’s older brother and his newly pregnant wife got married back in 2010, waiting just a short time before having their first child. But the actor is so smitten with little India that another baby was just meant to be.

“She’s the best!” Hemsworth said of his daughter. “It makes it harder to leave and go to work. I enjoy being at home a lot more than I ever have.”

Likewise, Pataky made a similar comment, saying that it’s important to make time to spend with your family. “You have to make an effort and try to stay together as much as you can,” she told People magazine.

“If we start splitting and doing other things it’s not going to last,” Pataky continued. “We try and keep it as normal as much as we can — like a typical family.”

The Fast & Furious 6 actress made a rare appearance at Santa Monica’s Oceana Beach House party in celebration of World Oceans Day. While there she revealed she only leaves her home and family for very special occasions or causes she cherishes.

“You become more sensitive about a lot of things,” Pataky said, referring to having become a mom. “With things like this, the ocean, you want to protect it for your kid to be able to see the world the way I saw it.”

Pataky, who was born in Spain, also gushed about her daughter, sharing that she’s almost walking, and she says “mama” and “papa.” She also coyly said, “We’ll see,” about being ready to have a new baby.