Miley Cyrus isn’t shy about making herself look any way she wants — she’s even called it feminist. But she showed up to an event Tuesday night missing a very important part of her face. 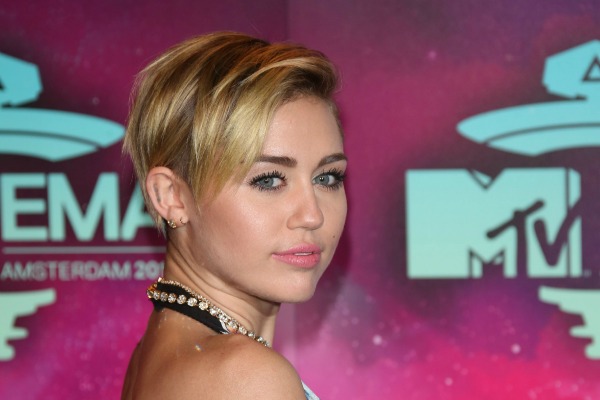 Miley Cyrus has become such a character that she makes news with one small change. Or rather, two small changes.

The singer was photographed with some fellow celebrities, and was missing her eyebrows! Actually, it appears those eyebrows were bleached blond. Cyrus was out in Los Angeles at an event along with model Miranda Kerr and singer Lily Allen.

Newly single Miranda Kerr first posted a photo with the “Wrecking Ball” singer with the caption, “Shot by the master @mertalas with the gorgeous @mileycyrus.”

Lily Allen then posted her own photo, with special guests Cyrus and her tongue.

While it might seem surprising that Allen and Cyrus were out together, they actually have quite a bit in common. Allen is known for her trashing of the entertainment industry, including their portrayal of women. She came out with a new video last week, and looked to be making fun of not only ’90s rap videos, but also artists like Miley Cyrus and Robin Thicke.

“I suppose I should tell you what this b**** is thinking/You’ll find me in the studio and not in the kitchen,” she sings in her song “Hard Out There.” “I won’t be bragging ’bout my cars or talking ’bout my chains. No need to shake my a** for you ’cause I’ve got a brain.”

Cyrus is also not shy about how she feels about the industry, and thinks her constantly evolving looks serve as a role model for women.

“I feel like I’m one of the biggest feminists in the world because I tell women to not be scared of anything,” Cyrus recently told BBC Radio 1. “For me, it’s not even that I’m a feminist. I’m for anybody. I’m for everybody, for everything. I don’t care what you wanna do in your life, or who you wanna be with, who you wanna love, who you wanna look like.”

The singer added that she is empowering to women because “I’m loud and funny and not typically beautiful.”

The 20-year-old seems to be motivated to prove her point that no matter how you change yourself, you can still be beautiful and successful.